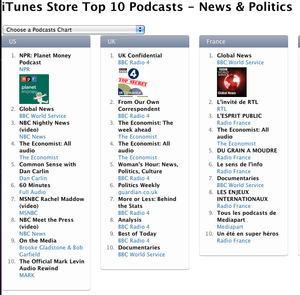 Broadcast programs and digital-only news providers such as NPR, MSNBC and the BBC World Service fill news podcast charts. NPR even had 29 million podcast downloads in 2012, up from 12 million in 2012. But as of Tuesday afternoon, a traditional newspaper doesn’t make an appearance on Stitcher’s news podcast chart until number 21, Wall Street Journal What’s News.

It seems newspapers’ movement toward podcasts, once seen as a major traffic source, died around 2010, around when USA Today, the Los Angeles Times and The Boston Globe cancelled their podcasts. The New York Times, too, killed most of its podcasts in December 2011, after eight years of programming. It held onto its front-page podcast for three months then eliminated that one as well, though it has since revamped its podcasting efforts with new programs, including video podcasts on world news, business, national news and wedding stories.

The Times explained the decision by saying “other venues and programs … may be more advantageous in connecting with our audience.” The Globe echoed a similar sentiment on the demise of its podcasts:  “While the listeners seemed satisfied and very devoted to the podcast, the numbers weren’t big,” said former editor Martin Baron, who also emphasized the several hour daily time commitment podcasts require. “So, when we had to review how to spend our money, podcasts didn’t rise to the top of the priority list. They were close to the bottom.”

But while podcast listeners are still a minority of the overall population, according to the Pew Research Center’s 2013 State of the News Media report, innovations in the few years since newspapers abandoned podcasts may provide incentive to resume audio programming. As USA Today notes, wireless connectivity on smartphones has eliminated the difficulty of having to plug in iPods to transfer podcast files, especially considering the wide variety of apps now available to stream podcasts. Additionally the rising culture of multitasking is embracing this hands-free news access. Will newspapers follow suit?

Slate, which started podcasting in 2005, has debunked the idea that such audio programming is a money-losing venture. Advertisements in its podcasts sell for more than placements anywhere else on the site, Nieman Lab reported. They’re also among the easiest to sell. Additionally, Slate sells tickets to podcast tapings, to which listeners happily lineup to see. While Slate declined to provide revenue figures, publisher John Alderman told Nieman Lab that “it is definitely a profitable part of the business.”

Moreover, the conversational tone of advertisments in podcasts make them more like sponsored content. Many hosts, such as those on Slate’s most popular series Political Gabfest, casually read the ads between segments, making them harder to tune out.

“What we’ve found, and what the advertisers found, is it’s incredibly powerful when the person is speaking to you, whether you’re in the car or making dinner,” Alderman said. “The conversational tone of podcasts and especially the Slate podcasts make it a truly personal connection.”

Last year, Slate‘s podcasts were downloaded more than 1 million times per month, according to Nieman Lab.

“For us it really is the part of Slate that people are absolutely most engaged in,” said Andy Bowers, executive producer of podcasts.

While most newspapers seem hesitant to re-enter podcasting, The Wall Street Journal has already established itself in the field. It’s not only the sole traditional newspaper to make Stitcher’s top 100 podcasts chart, but it does so thrice with This Morning, Tech News Briefing and What’s News. Two of those three are even currently ranked higher than Slate’s Gabfest, which in 2012 averaged episode downloads up to the hundred thousands, according to Nieman Lab. It is, however, worth mentioning that many of The New York Times’ new podcasts are not on Stitcher and thus not included in the rankings.

The Journal has six daily podcasts, which, among the top 100 listers, include The News Hub, Your Money Matters and Watching Your Wallet. It also has five other podcasts, put out less frequently. Few other newspapers come close, including the Guardian. Of its 12 podcasts listed on its site, the most frequent are put out only weekly. Some of its other podcasts haven’t been updated in months, even though sustained engagement seems key to successful podcasts.

Traditional newspapers should find their voices in podcasting, lest they be drowned out by other news outlets.