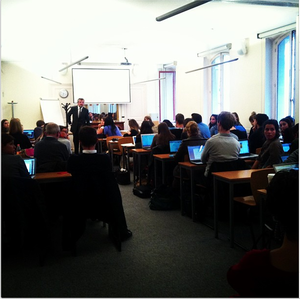 “In France we’re not particularly advanced regarding digital integration, so we could follow the examples of what those before us have done. For Le Figaro, amongst others, the Daily Telegraph as well as the Italian La Repubblica were sources of inspiration,” Salvator said.

In an hour-long conversation with the j-school students, Salvator described how Le Figaro set about converging the printed paper and its online version, and the challenges of finding the appropriate business model online.

Le Figaro started to develop its online presence in 2003/04, relatively late compared to other papers such as Le Monde. “We started talking about convergence in 2004 and we’re not at the end yet,” he said, emphasizing that the difficulties in trying to marry print and online are the same for everyone.

The first step towards integration, Salvator explained, was the physical integration of the two newsrooms. In 2007 the online newsroom was moved together with the print one and in 2011 found itself at the very center of the newsroom, with the other desks around it in circles. Fundamental to real integration was the convergence of the teams; all journalists should be able to work interchangeably for both platforms.

Illustrating the main problems of integration, Salvator stressed the timing factor and the difference in editorial approaches. The news cycle clearly is very different online, compared to the printed version of the newspaper. The newsroom must therefore adapt to serve both.

Online is the expression of a new culture, where the image gets more space compared to the text. But where the two differ most is in editorial approach. The website and the printed version address different audiences. While the newspaper talks to about 300,000 people who pay for it, online there’s an audience of about 11 million users who do not pay. So, while the newsroom moves towards convergence, the content must diverge.

“We can’t give the same content to our newspaper’s readers – who pay – and to the site’s users, who don’t pay,” Salvator summed up. He cited the example of La Repubblica, which differentiates the print paper from the content available on the website: very few articles from the print edition go online, where they insist more on videos, posting a lot of them every day. “We’re trying to differentiate, to be sure we offer premium content to our print readers,” said Salvator.

The real debate: free or paid?

The real discussion is no longer about print vs. online or the integration of the two, but rather free vs. paid content. News is a commodity, Salvator emphasized, and it is still difficult to convince readers to pay for news online. Online subscribers get a PDF version of the newspaper and some premium content accessible just to them. “But you can’t overdo the paid-for content on the website because you risk sending away users who look for the free part. It’s always a balance between the two,” Salvator said.

Regarding mobile strategy, Salvator said it is relatively easy to ask people to pay for content on tablets, while on smartphones it is more complicated.

Image from the Instagram profile of Alice Antheaume, Head of International Development at the Sciences Po Journalism School.