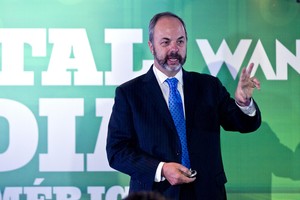 That’s set to fall between 7 percent and 12 percent in 2013. While digital advertising is growing rapidly, it remains concentrated in a few hands: just five companies take two thirds of the total of $99 billion market.

However, Doctor said despite the recent chaos in the newspaper market, the industry may be on the cusp of a golden age. Newspapers have within their reach a huge market, way beyond anything they could have imagined 25 years ago.

The rise of tablets is the first real replacement of the newspaper. And these are set to keep growing – in 2017, there are projected to be 900 million tablets being used. Tablet sales are already now overtaking desktops. The more devices there are, the more time spent online.

There has been the pleasant revelation that subscribers will pay for digital content. He cited The New York Times, which has 700,000 digital subscribers. It’s a good number, he said, but it has plateaued. So newspapers should be focused on developing more products.

This is the experience of many other news publishers as well. For example, Bild in Germany is experimenting with licensing video of football matches. Politico is producing specialty publications, which it sells for between $3,000 and $8,000 a subscription. Others are producing e-books they are giving away as part of a subscription.

“2014-2016 is about selling more stuff,” Doctor said. He cited the Chicago Tribune’s Tribnation as an excellent example of building membership among readers, something that will be increasingly important.

What has still yet to occur is a Netflix for news, but we are getting close, he predicted.

With successful paywalls, newspapers have had the confidence to raise prices – something they hadn’t done for around a decade – leading to 5 percent increase in circulation revenue in the United States.

The lesson is: do more, not less.

Newspapers have good brands, data on their readers and strong relationships with those customers. For this reason, business leaders such as Jeff Bezos and Warren Buffett are interested in owning newspapers – they see a future for them.

The hope of Facebook or Google acquiring a news organisation is a dream – neither has shown much interest in buying rich content producers.