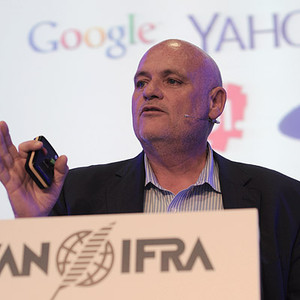 Speaking at Monday’s Media Port session on “Community building,” Paton describes how a video editing and publishing app from Tout (Stand 3.2.600-U) was deployed to 1,800 journalists at the company’s 75 dailies. The result has been 25 million video views and “a new form of television news.

“We are out-televising television,” he says, citing statistics that show DFM videos out-drawing broadcast TV newscasts. The journalists post between 5,000 and 7,000 videos per day.

“We’re starting to monetize it,” via advertising, he says.

What drove the move, he says, is the need to re-connect with news consumers. “What they want is more video, on mobile, in real time,” and that is what they are getting, he says.