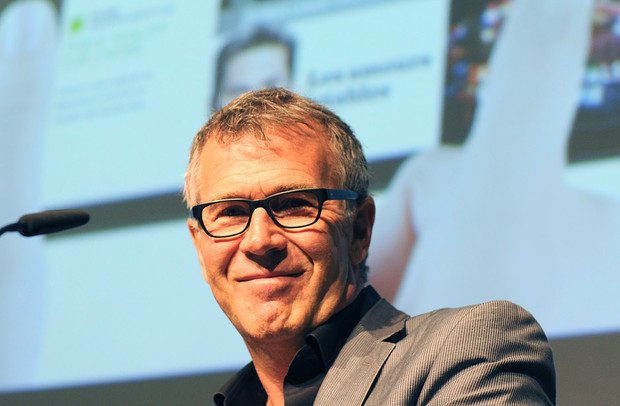 Today, nearly six months later, President and Publisher Guy Crevier told participants at the Tablet & App Summit on Monday afternoon in Berlin that La Presse+ has been extremely popular with both readers and advertisers.

To date, the app has been downloaded 300,000 times, and over the summer months was attracting an average of 800 new readers a day, Crevier said. On average, he said people are spending 35 minutes a day during the week and 75 minutes on weekends with the app, which the previous speaker, designer Mario García, called “one of the most beautiful out there.”

Crevier said his company decided to make the major investment in developing La Presse+ because with falling ad revenues and fewer and fewer readers, “the model of the print daily newspaper is simply not sustainable.” Furthermore, he said they decided to make La Presse+ free in order to appeal to the largest possible audience, which would appeal to advertisers.

“News available free of charge is an irreversible phenomenon,” he said.

Crevier added that he personally is against the concept of paywalls for newspapers’ digital products because “when you are in a shrinking market, paywalls don’t make sense.” However, he acknowledged that paywalls will likely work for a few select publishers such as The Wall Street Journal or The New York Times because of their high quality and unique content.

Crevier broke down the $40 million (Canadian) investment cost this way: $24 million for salaries, $2 million for research into consumers and advertising effectiveness, $6 million in capital expenditures and $8 million for external consultants and development.

Asked when he expected La Presse+ to recoup its investment costs, Crevier said they are on track to do so within 18-24 months from now.

He also offered an extensive and impressive demo of La Presse+ that showed how intricately La Presse+ blends both content and advertising packages so that users are, for example, able to read about a new film, watch the trailer for it and then find out where it is showing and buy a ticket, all without leaving the app. Similarly, an ad for a clothing store will allow a user to see how various colours and patterns of shirts, pants, etc. look on a model and then easily click and order the clothes themselves.

In addition, La Presse+ is able to tell its advertisers exactly what people look at and use. “We can give advertisers very precise numbers… we can measure results and offer comparisons,” Crevier said. “Our customers can measure the true success of our ads.”