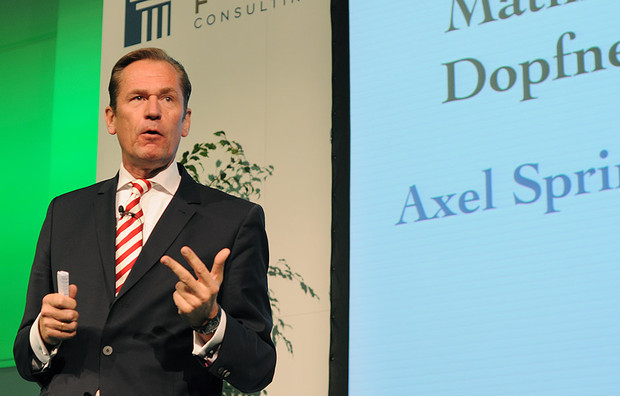 Speaking at the opening session of the Expo on Monday, Döpfner says nonetheless online journalism can be better than “analog journalism.” It can be faster – but does not need to be. It can just as well be slower and more thoughtful, more reflective. Also, the interactive aspect of digital journalism allows it to be enhanced by the intelligence of news consumers.

What is important, says Döpfner, is that publishers invest in journalism, because strong editorial content is key to success. Another key is communicating the brand via multiple platforms.

Döpfner says 47 percent of Axel Springer’s revenue comes from digital platforms – not enough. “We have more to do,” he says. Axel Springer staff was “very worried” when the paywall for online content was launched, and very relieved when the results turned out better than expected. He says there are now 47,000 digital-only and 27,000 multi-platform subscribers to Die Welt, more than anticipated. Most surprisingly, page views did not drop off.

He says Axel Springer decided to sell its remaining regional newspapers to the Funke media group because growth in that area had become impossible. Citing Bild’s supposed market dominance, German cartel authorities blocked all expansive moves on that front.

Döpfner welcomes Huffington Post to Germany (it is in the process of launching), saying he has “lots of respect” for the operation, but says it devalues journalism. “When they charge readers for content and pay writers, it will be a perfect world,” he says.