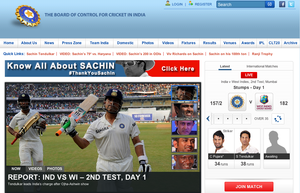 Tendulkar’s closing acts – taking the pitch, stepping into the batting crease, and the final wave to his hometown crowd, were only able to be seen by a select few due to the overwhelming control of the Board of Control for Cricket in India (BCCI).

According to a report by Malcolm Knox in The Sydney Morning Herald, the governing cricket body of India controlled all photographs, eyewitness radio and print accounts of Tendulkar’s final appearance. The match was available to paid subscribers worldwide, but was accompanied by BCCI-sanctioned commentary.

The parties these policies affected the most were the media entities that wanted to cover the historic event. Andrew Moger, Executive Director of News Media Coalition, in an email to WAN-IFRA said that media intending to report on the event had these options:

Moger also stated that, like any other major news stories, editors needed to weigh short versus long term interests. He added that this wasn’t the first dispute between the BCCI and international media organisations.

Since the decision to ban some photographic and news agencies from covering BCCI and IPL matches, several news outlets have suspended or completely curtailed their coverage of recent tours to India. They have also made their case known by reducing their coverage, not using BCCI-sanctioned images, and editorialising the issue. Moger added that most newsrooms considered it to be a major issue.

As Knox pointed out in his story, “Sir Donald Bradman said that nobody owned cricket; players and administrators were the game’s temporary custodians.”

The BCCI has proved otherwise. The major question in this scenario is if sports should be commodified. Should they and other sports governing bodies have the right to package their product and auction it off to the highest bidder without any concern for the average consumer?