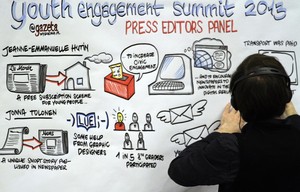 To talk about these very issues, news executives from 22 countries gathered this week in Poland’s capital to discuss the most innovative ways to expand readership among young people. The Youth Engagement Summit was an exciting time to hash out new ideas to take home while the winners of this year’s World Young Reader Prize also collected their awards at the headquarters of the Gazeta Wyborcza in Warsaw, Poland.

Engaging young people is a challenge for any publication – but with a mix of experimentation and innovation the winners proved anything was possible.

Youth in the newsroom

Several of this year’s winners brought young people right into the newsroom – and it was a win-win situation for everyone.

De Stentor from the Netherlands created a mobile application and website for young adults (18-25) by pairing up with a local media studies program. Young journalists-in training come directly to the newsroom for a six-month period and produce multimedia content and articles right in the newsroom. Sometimes the digital-minded student journalists even teach the paper’s staff, said Editor-in-Chief Harold de Haan.

Avisa Nordland in Norway also stopped a circulation decline among young people by turning 100 young adults into editors and cutting the price of subscription.

Many of the most successful youth engagement projects are centered on community issues that affect young people. Any newspaper can take a community problem as an opportunity to spur change and involve young people in the process. This happened in Gothenberg, Sweden after an article in Göteborgs–Posten sparked outrage among some young people in the outskirts of the city. It even led to protests in front of the paper’s building because they felt that the paper didn’t represent them.

“Who has a bigger problem? The newspaper or the young people?” asked News Editor Anders Goliger during the summit. “The newspaper.”

The project might have started out with an editorial mistake but it turned into something positive. The paper set up a newsroom within the young people’s community – in a local cafe with just a few laptops and some of the paper’s journalists and photographers.

In one day, the teenagers produced an eight page newspaper (print, PDF, and online) called Wazzup.  They not only learned about the journalistic process, but were directly given a voice in the paper.

Talk, but don’t talk down

The best way to find out what a young person wants is to just ask them. Guri Leyell Skedsmo who is the editor for Norway’s only paper for kids Aftenposten Junior said its easy to design news for young people, but as long as you interview them first.

Also, don’t dumb down the content. Context is important – especially if a young person hasn’t followed a story since day 1 – but there’s not need to dress down content.

“Adding video is not enough, it’s about your angle. And kids know when you’re talking down to them,” said student journalist Matthijs Le Loux who participated in De Stentor‘s Minjz project during a panel session.

It might be tempting, he said, but newspapers should never put “a funny hat on a cat just to elicit a hit.”

“Make them fall in love with your product.” That was advice from Tarrence Karmelia Palar from Indonesia’s daily Kompas that won for its Youth Spread project.

Timed with New Year’s celebrations and the region’s heavy flood season, the paper turned its front page into wrapping paper for young people to use for gifts for disadvantaged people. Palar said it’s important to trigger an emotional bond with youth so all attempts to engage youth need an extra push.

Another key to success is making something that’s not yet on the market for young people. “What’s on in Bergen” from Bergensavisen in Norway strengthened its position on knowing the city by aggregating all events in a user’s area via social media calendars. The project spurred a significant jump in readership among 15-29 year olds. The project’s leader Eva S. Johansen advised all to be innovative, assertive and local.

Another three words to remember from the Philippine Daily Inquirer, which concentrates on making the program: portable, adaptable and replicable.” Since 2007, the paper has held interactive storytelling sessions with “wacky” hosts for children aged 7 to 13. The mobile programme has held 300 reading sessions in 52 cities.

Think about the future, but don’t forget the basics

It’s the digital generation, so you might assume all newsprint must be traded for mobile, tablet, or computer. Not so fast – technological repackaging won’t automatically garner hits, and several papers said that young people still want their news on traditional paper.

Skedsmo from Aftenposten Junior said they chose a print format because young people today are constantly playing with gadgets, or are in front of screens.

“Some readers didn’t think parents would let them have another online thing,” Skedsmo said. “They also said they don’t get anything in the mailbox anymore.”

The paper interviewed young children and found out they wanted a paper, not a magazine, good quality paper, lots of colour and big pictures and representation of children. And that’s exactly what the paper did.

A full briefing on the year’s World Young Reader Prize winners is at www.wan-ifra.org/worldyoungreaderprize

Participants spent an afternoon in an “Ideathon” to learn how to create and test “personas” that can help guide discussions with the young about how news publishers can better engage them.

Two Polish teenagers – Emilia Kolodziej and Piotr Slugocki – served as both models for such personas and also judged proposals for new approaches at the “Ideathon,” which was led by the Knight Foundation’s Chris Sopher and Danish Newspapers in Education (NIE) expert Aslak Gottlieb.

The event started with Gottlieb, and later the entire audience, interviewing the teens to learn about their news consumption patterns, interests, and perceptions.

Piotr, 19, a music lover and drummer, said he “didn’t read newspapers ever” and both teens agreed that if they needed to find out about breaking news they’d turn to the internet, radio or just by “calling my mother.”

A visual depiction sketched by Julian Kücklich of their personas – demographics, habits, behaviours  – were later used by the group to brainstorm new products that could catch their attention, and ultimately their loyalty.

Both teenagers are involved with the Junior Media programme of Polskapresse, which arranged for their participation, along with their teacher Monika Konopnicka.

Throughout the three-day summit many commented on the importance of focusing on lifestage interests and content rather than only considering a young person’s age. This left the participants with a challenge: how to harness Piotr and Emilia’s interests to improve their news literacy, and set up them up to be lifelong readers.

Pitches included a tailored newsfeed that grows only with your interests, user-generated reviews on music and books by youth, and a make-it-happen application where users showcase their wishes in 140 characters and readers vote for the best dream.

Emilia and Piotr liked most of the ideas, especially ones that targeted just their interests.

At the close of the session, participants were able to pitch their own idea that could become the next innovation at home.

Other members of the Ideathon team were Aralynn McMane, executive director for young readership development at WAN-IFRA, Alexandra Waldhorn of WAN-IFRA and Radio France Internationale, Markus Pettersson of Resultatfabriken Consulting in Sweden) and Cristiane Parente, former youth programme director for ANJ, the Brazilian publishers association and now a researcher at Minho University in Portugal.