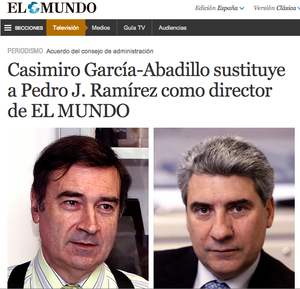 Spain’s longest serving editor, Pedro J Ramírez (left photo), will hand control of El Mundo, the newspaper he founded in 1989, to his deputy Casimiro García-Abadillo (in right photo) after this Sunday’s edition.

RCS Media Group announced the change of leadership following a board meeting on Thursday.

A press release said the change marked the beginning of a new phase for the newspaper. The new editor will be asked to revive print circulation and strengthen El Mundo’s digital leadership, so that the paper can return to financial and economic stability.