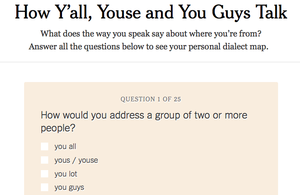 How Y’all, Youse, and You Guys Talk is an engaging survey where users answer questions about the word choices they make in their everyday lives. After completing the survey, a conclusion is displayed as to the American city that the user’s language use most resembles.

Created by Josh Katz and Wilson Andrews, the quiz’s reach has been phenomenal.

“Think about that,” writes Robinson Meyer in a story on The Atlantic‘s website. “A news app, a piece of software about the news made by in-house developers, generated more clicks than any article. And it did this in a tiny amount of time: The app only came out on December 21, 2013. That means that in the 11 days it was online in 2013, it generated more visits than any other piece. … It’s staggering.”

What’s more, Katz created it while doing an internship at The New York Times, as Catherine Taibi points out in a story on The Huffington Post website.

In an interview with Ryan Graff of Northwestern University’s Knight Lab, Katz said he had always been interested in data visualization. Katz was a graduate student in the Department of Statistics at North Carolina State University. As Graff writes, Katz was very interested in a set of data, The Harvard Dialect Survey, headed by researchers Bert Vaux and Scott Golder. The study consisted of 30,788 participants responding to 122 questions on their dialects and language use.

Using the data provided and statistical analysis, Katz created heat maps that portrayed the Harvard Dialect Survey data. In August 2013, The New York Times invited him for an internship. By this point, Graff writes, Katz had already planned on using the data for an interactive quiz.

Katz began creating his own language survey, originally starting with 140 questions before parring down to around 20, which he posted on the website RStudio.com. Katz then went on to survey 350,000 people on their age, gender, and city they lived, in addition to dialect questions.

The final step was creating the actual quiz using on The New York Times database.

The New York Times audience is clearly embracing content it is engaged with and can connect to. How Y’all, Youse and You Guys Talk has shown impressive results and could pave the way for other online news sources to embrace similar interactive, user friendly, entertaining content.