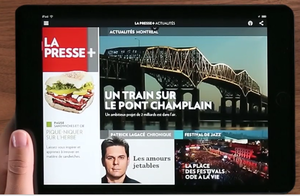 La Presse spent some CAN$ 40 million and three years developing the app, and it has been a big hit with users, who spend approximately 35 minutes a day accessing it (that figure jumps to 75 minutes on weekends), La Presse+ Publisher and President Guy Crevier told us in an interivew for our November/December 2013 issue of World News Publishing Focus (pages 10-11).

“At present, our strategy is aimed at re-establishing ourselves as a mass medium, not a niche medium,” Crevier said.

Offering La Presse+ for free is a central part of that strategy, and Crevier expanded on his views about paywalls during the Tablet & App Summit held during our World Publishing Expo last October in Berlin.

“News available free of charge is an irreversible phenomenon,” he said.

Crevier added that he personally was against the concept of paywalls for newspapers’ digital products because “when you are in a shrinking market, paywalls don’t make sense.” However, he acknowledged that paywalls will likely work for a few select publishers such as The Wall Street Journal or The New York Times because of their high quality and unique content.

An Android application of La Presse+ is expected to launch this spring.