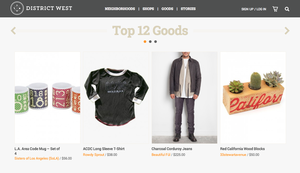 In announcing the venture on Monday, the Los Angeles Times Media Group called the new website an extension of the Southern California lifestyle, whose “trends are coveted worldwide.” The e-commerce site will predominantly feature local designers and artists.

District West has a simple layout consisting of four tabs and a scroll-down style similar to BuzzFeed. The home page has a Top 12 Goods photo montage. The page also features local culture and fashion blogs. Most items on the website will be under $200.

University of Southern California professor of journalism Gabriel Kahn endorsed the move. In an interview with Southern California Public Radio, he stated that the majority of District West’s clientele would likely be under 30 years old and not subscribed to the LA Times’ print edition. Kahn also said that, through the website, the paper was expanding the scope of its relationship with advertisers.

Others are not as optimistic. In the same article, Rick Edmonds, media business analyst at Poynter, said that this isn’t the first time a newspaper has attempted to launch an ecommerce spin-off, and history is not on the LA Times’ side.

“My impression is it always seemed like a good idea in concept, but I don’t know of many or any that have really sort of blossomed in a big way,” Edmonds said.

In an interview with Alexander C. Kaufman of Media Bistro, Nancy Sullivan, the Los Angeles Times’ Senior Vice President of Communications, said that should the launch be successful, the site will expand into Orange County.