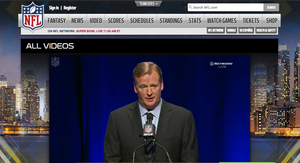 The new product will launch this summer, ahead of the start of the 2014 NFL season and will be available across all internet connected devices.

In an official release, about the program, the NFL says it will consist of personalized news feeds that reflect each fan’s tastes, including their favourite teams, players, and preferred news. NFL Now will be a free, ad-supported service, with users having the option to pay for a premium package that includes more video and exclusive content.

“We are always looking for ways to better serve our fans, and NFL Now will do just that,” states NFL Commissioner Roger Goodell (pictured) in the release. “Our media strategy has been a key component in the growth and success of the NFL over the past 50 years, and we fully expect NFL Now to be a big part of that initiative in the future.”

According to Capital Pro, the NFL began developing the program in 2012, and will begin marketing NFL Now during the Super Bowl, with two 10-second advertisements for the service.

Gillette, Microsoft, Verizon, and Yahoo will partner with the league in launching NFL Now according to the press statement. Additional sponsors and partners are expected to be announced in the coming months. Verizon and Microsoft will be of particular value to the NFL in the distribution of the new app. Verizon will help deliver NFL Now to its customers through the LTE multicast technology, while Microsoft will make the app available through both Windows devices and the Xbox One.

As Amol Sharma of The Wall Street Journal writes, the NFL already has a major footprint in mobile media. The NFL Mobile app, in conjunction with Verizon Wireless, allows users to stream live games on their mobile devices. Sharma also points out that the league has an agreement with Twitter that makes football content available through the service.