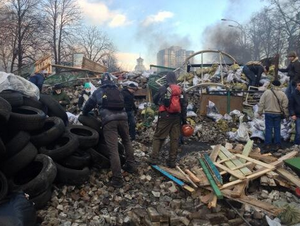 The mission – a partnership comprising international and Ukrainian media and press freedom organisations, including WAN-IFRA – found clear evidence that journalists, other media workers, and media organisations are being directly targeted and attacked because of their work.

As the violence escalated in Kiev, the mission was forced to move locations, with the original hotel base now operating as a makeshift hospital and morgue.

But the partnership continued gathered substantial evidence during the mission, concluding that there is a culture of impunity in Ukraine caused by a failure to investigate and prosecute crimes against journalists, media workers, and media organisations. And that the authorities have engaged in blocking, censoring and obstructing news organisations and news content, particularly during the current demonstrations and protests.

Similarly, the mission found that economic pressure and other indirect methods of inhibiting and discouraging critical reporting continue to be employed by Ukraine authorities.

WAN-IFRA’s Deputy CEO Larry Kilman has told the Editor’s Weblog that the press freedom partnership was caught up in the conflict. “…our meeting at the journalists’ union was cut short as the situation deteriorated, and we spent the afternoon at the fortified offices of the Organisation for Security and Cooperation in Europe,” he said. “We’re now in a safe airport hotel (but) our former hotel is now a makeshift hospital and morgue.”

The mission’s formal investgiations concluded with this message: “(We) respectfully remind the Ukraine government that it is the duty of the state to protect all citizens, including journalists, and to ensure that journalists and media organizations can carry out their duties without fear of violence or harassment.”

According to the latest update from Kiev, one journalist has died in the violence and 167 have been reported injured.