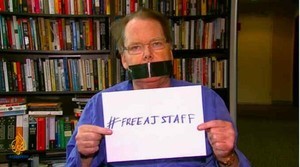 The rally in Australia started the campaign, initiated by Al Jazeera, and was accompanied by calls for the Australian Prime Minister to intervene personally.

Al-Jazeera reports that the White House, the European Union and the United Nations have all called for the release of the journalists.

In a statement dated 10 February, WAN-IFRA expressed serious concern at events in Egypt and called for the immediate release of all journalists imprisoned for simply doing their work.

Today protests are continuing around the world. So far, protests have taken place in South Africa, where Greste had previously worked, and London. There, the Foreign Press Association in London has also expressed solidarity.

A social media campaign has accompanied the protests. Al-Jazeera journalists began to photograph themselves with their mouths covered with tape reading “#freeAJstaff”. The trend then went on to spread globally, with journalists from all over the world joining in.

The Greste Trio trial has been adjourned until 5 March.