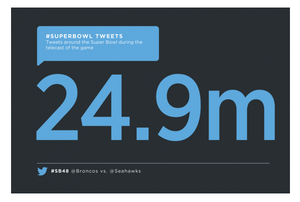 50 million Facebook users discussed the Super Bowl during the game, resulting in a total of 185 million interactions, according to Mashable. Twitter usage was also rampant, with 24.9 million tweets during the game, up 800,000 from last year, writes Matt Holsen of Keloland Television.

During the game, the most popular event on social media was the first play of the second half, when Seattle Seahawks wide receiver Percy Harvin fielded a kickoff and ran 87 yards for a touchdown. The run, which lasted less than 10 seconds in duration, spurred a phenomenal 381,000 tweets per minute, the highest rate of the evening. That is 39 percent higher than the peak social media period of the 2013 Super Bowl, when the power at the Mercedes-Benz Superdome in New Orleans, Louisiana, went out.

Among the hashtags used were Chevy’s #SilveradoStrong and Coca-Cola’s #AmericaIsBeautiful. Of the 54 ads reviewed by Marketing Land’s Danny Sullivan, five specifically mentioned their Facebook pages, the most for any individual social media network. Twitter was mentioned four times, and YouTube three times. Google+, Pinterest, and Instagram were not mentioned at all. 41 percent of advertisers included their URL at one point in the ad.

At approximately $4 million per 30 second advertisement, companies are attempting to get as high a return on their sizeable investments as possible, a big reason for the use of social media and hashtags in commercials.

“Several large trends are converging to fuel this phenomenon. Television’s power is waning, making must-see TV that consumers choose to watch live … more valuable to advertisers than ever before. But as the price tags for these live TV spots rise, brands want something more than 30 seconds of TV exposure for their $4 million. They are finding that extra value on social media,” Ad Week’s Kevin Bobowski told Gross.

Regardless of the outcome, the 2014 Super Bowl proved victorious for both advertisers and social media networks.