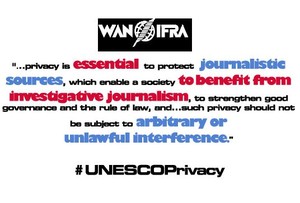 Late last year, UNESCO’s 195 member states adopted a resolution on freedom of information and privacy, formally recognising the value of investigative journalism to society, and the role of privacy in ensuring that function.

“…privacy is essential to protect journalistic sources, which enable a society to benefit from investigative journalism, to strengthen good governance and the rule of law, and that such privacy should not be subject to arbitrary or unlawful interference,” the resolution reads in part.

The resolution, which represents a significant but under-recognised endorsement of investigative journalism, was brought by Brazil and adopted at UNESCO’s General Conference last November.

A proposal that UNESCO should consider a process to adopt non-binding standards or guidelines to address privacy in cyberspace was replaced with a mandate for the Organisation to complete a consultative study on privacy, free expression, access and ethics on the Internet, which will present several options to the member states in November 2015.

Guy BergerAs part of this investigation, UNESCO’s Director of Freedom of Expression and Media Development Guy Berger is interested in hearing from editors and journalists. “UNESCO would welcome the views of editors on the free expression-privacy issue, particularly as it plays out in cyberspace,” he told WAN-IFRA in an email interview from New York.

WAN-IFRA: Why is privacy essential to the protection of journalists’ sources?

Guy Berger: Whistleblowers will fear contacting journalists if they have reason to doubt confidentiality. The effect? Less news about corruption or abuse will enter the public domain, and everyone will be information poorer. No action can be taken on problems that remain hidden. All this is why many countries have laws which shield journalists from having to reveal their sources.

WAN-IFRA: What are the potential consequences if sources’ privacy is subjected to “arbitrary or unlawful interference”?

Guy Berger: If there is no adequate protection, this has a “chilling” effect in that people do not feel safe to speak to the press. This is why it is a key journalistic ethic to shield sources from being exposed, sometimes even sustained by reporters at great personal cost and in the face of a legal process. It is especially the untoward pressures, however, which put the reputation of the profession at greatest risk.

WAN-IFRA: How difficult to navigate are the tensions surrounding the balance between freedom of expression and privacy as regards practice of journalism?

Guy Berger: Law enforcement agents may cite a legitimate interest in overriding journalists’ interests in privacy of sources, and each side may have a case. The balance has to be made with reference to the widest public interest and the longer-term effect of information flows when sources are not guaranteed confidentiality. Any court of law that weighs the issues needs to keep in mind the international standards of necessity and proportionality. In order to pursue justice based on press revelations, it is often not necessary to demand that a journalist disclose secret sources – other channels are available. In addition, only a portion of information may be needed for law enforcement authorities to do their job. So, nuance is needed when resolving tensions.

WAN-IFRA: Is there enough awareness of these issues among editors and journalists broadly? Why should they be concerned and active on these issues?

Guy Berger: People in the media are very aware of these issues all the time. They know full well that their claims to source privacy are not so much individual rights as an attribute of their community of professional practice. The privacy is essential to them (in) their public service role. Most journalists know well that the general privacy of ordinary citizens should be respected – i.e. none would argue that there was public interest justification in the UK phone-hacking cases. At the same time, an investigative journalist will know that anyone’s claims to privacy are a sham if the intention is to conceal ills like theft, pollution, illegal money laundering or domestic abuse.

Investigative journalists are also increasingly aware of state-sponsored breaches of privacy in the age of surveillance. The author commissioned by The Guardian to write a book about the Edward Snowden case, Luke Harding, revealed last week that he had watched paragraphs of his work disappear from his computer screen before his eyes. “I wrote that Snowden’s revelations had damaged US tech companies and their bottom line. Something odd happened,” he reported. “The paragraph I had just written began to self-delete. The cursor moved rapidly from the left, gobbling text. I watched my words vanish. When I tried to close my OpenOffice file the keyboard began flashing and bleeping.”

Meantime, the UN hosted an international expert seminar on the Right to Privacy in the Digital Age in Geneva yesterday, during which UN Special Rapporteur on the Promotion and Protection of the Right to Freedom of Opinion and Expression, Frank La Rue, called for a special United Nations mandate for protecting the right to privacy. ”I  believe that privacy is such a clear and distinct right…that it would merit to have a rapporteur on its own,” La Rue said. “If we pitch national security against human rights, we’ll end up losing both,” he added.

This seminar followed the historic adoption of the UN’s Right to Privacy in the Digital Age resolution last December, which recognises the need to uphold people’s offline privacy rights online as well.

If you’re an editor or an investigative journalist, WAN-IFRA would like to hear your views about the implications for journalism of this complex and increasingly critical freedom of expression-privacy debate. We will pass your feedback on to UNESCO. Please leave your comments below, use the hashtag #UNESCOPrivacy on Twitter, or get in touch with the World Editors Forum via email (julie.posetti@wan-ifra.org).