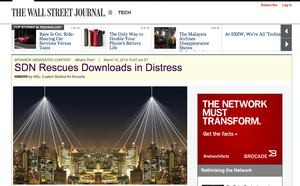 “We’re been in the branded content business for a long time,” Fellows said in that interview. “We’re taking our finely honed skills to push our own limits and create a new, standard-setting definition of branded content. We are using video, infographics, surveys and data to create intellectually demanding stories. We want our readers to notice that we are engaging them in new ways. We want them to connect with brands in ways that they haven’t before.”

He also noted that the company had given careful consideration to their native advertising plans and guidelines.

Specifically, native advertising or branded content is content that helps an advertiser tell a story about their brand through traditional storytelling means such as text, images or video. To readers, native advertising can appear similar to editorial content, which is why publishers often go to lengths to make it clear that the content is “sponsored” and was not created by their editorial staff. The Wall Street Journal is doing this by using a light yellow box across the headline of a story (see image above) and also noting at both the top and bottom of the sponsored story that the content was not created by the WSJ editorial team.

“We created our own guidelines in order to implement content that complements, rather than interrupts, the reader experience,” Fellows said. “We make it very clear that The Wall Street Journal news organization is not involved in the creation of sponsored content. That clarity benefits our clients and our readers because all sponsor generated content is absolutely distinguishable from news and editorial content.”

Interestingly, the timing of Dow Jones’ announcement came only a day after an article in Time magazine by Chartbeat CEO Tony Haile titled “What You Think You Know About the Web is Wrong,” about the way people really read (or don’t read) online content. Among his points was the following one about native advertising:

“On the native ad content we analyzed, only 24% of visitors scrolled down the page at all, compared with 71% for normal content. If they do stick around and scroll down the page, fewer than one-third of those people will read beyond the first one-third of the article. … Simply put, native advertising has an attention deficit disorder.”

However, Haile also stressed: “The lesson here is not that we should give up on native advertising. Done right, it can be a powerful way to communicate with a larger audience than will ever visit a brand’s homepage.”

Noting Haile’s remarks, we asked Fellows by email how The Wall Street Journal plans to make sure they “do it right.” He responded:

“We need to ensure that the content generated is interesting and thoughtful – and if so, it will generate interest from the target audience. Tony’s comments also underline the need for robust and detailed analytics across all aspects of a client’s activity on our properties. There will be instances when native outperforms other approaches – but equally times when it doesn’t work as well. To that end, we’re going to build in detailed performance tools that will help us and our clients measure this.”

Asked about what he thought potential native advertising revenues might amount to for The Wall Street Journal, Fellows wrote: “This is impossible to answer at this stage, but probably single digit percentages for the foreseeable future.”