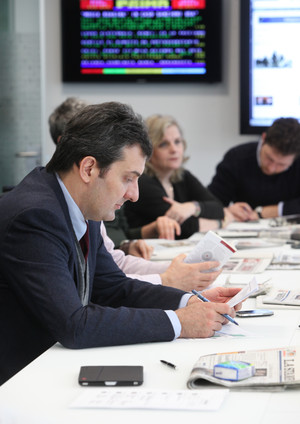 In what he described as a “…step towards the future,” Calabresi led the digital integration of his newsroom in 2012. This process involved the creation of three new editorial positions designed to bridge print and online outputs – a digital editor, a social media editor and a web editor. It also saw the introduction of a converged publishing system, along with the relocation and redesign of the newsroom, to organise reporters and production staff in concentric circles around an integrated print-digital centre.

Calabresi’s next project was the MediaLab, conceived as a “studio” that acts as an incubator for innovation, where La Stampa experiments with new ways of digital storytelling. The mascot of the MediaLab is the mobile integrated newsroom on four wheels known as the Web Car. The Fiat, which connects to wifi and the newsroom simultaneously, has a satellite dish on its roof and is dispatched for remote and location reporting, similar to a TV outside broadcast van. La Stampa aims to be a catalyst for innovation in journalism, not just a reporter of news.

Underpinning all of this innovation is Calabresi’s commitment to the principles of Open Journalism. “It is obvious now that the top-down approach where legacy media were the gate-keepers of news and information which they delivered to the reader is no longer valid. Now there is a need for exchange and sharing that is unprecedented,” he told WAN-IFRA from his Torino office.

Demonstrating his flair for innovation, Calabresi recently seized the opportunity to upturn the role of social media editor in his newsroom when the incumbent journalist was seconded to an external position.

“…we decided to have temporary social media editors in rotation, who are not traditional journalists but rather are well known and recognised by online communities as credible and authoritative. It’s an exchange of perspectives and knowledge. It’s a sign of openness that has no precedent in Italy.”

Acknowledging the historically closed nature of newsrooms, particularly in Italy, Calabresi has adopted an “open-house” strategy to social media management. “We’re opening our doors and letting them in our home with the humble acknowledgment of having something to learn,” he said.

The first of the rotating temporary social media editors, Pierluca Santoro, has been applying a more systematic approach, analysing traffic, audience reactions to La Stampa content shared on social platforms, and he has introduced strategically timed posts. “He (has) overhauled our approach. Before we were sitting in our world looking outside, using social media to send messages outside, now Santoro is our helmsman, showing us how to turn the approach upside down,” Calabresi said. “We have done a serious analysis of what we used to do and we have reassessed our presence on social media.”

La Stampa is no longer just “broadcasting” its content via social media, the newspaper is also using social media platforms as channels for crowdsourcing, and audience engagement with journalists. “(For example) we started a daily debate on Facebook – at specific time of the day a journalist from the newsroom, who’s covering a hot current affairs topic, is available to talk with the readers about that specific issue,” Calabresi explains.

The focus on La Stampa journalists engaging with audiences has also borne dividends on Twitter, where Chief Political Reporter Marco Castelnuovo (@chedisagio) is recognised as the leading Italian journalist when it comes to engagement, according to research conducted by his newspaper.

While this increased focus on audience engagement has led to journalists becoming victims of gendered and racialised abuse on social media sites, Calabresi rejects calls for regulating hate speech online. Significant in Calabresi’s assessment of the problem of online abuse is the success of the Open Journalism approach at La Stampa “…while there is sometimes a fear that if you open up to comments from the audience, you’ll get offensive contributions and insults, that hasn’t been the case for us. It is not happening, and we’re very happy about it, because it shows that when you set the tone of the conversation on a civil and appropriate level, your interlocutors recognize it and give back the same respect.”

While clearly focused on digital transformation at his own newspaper, Calabresi is also calling for defamation law reform in Italy. He says it is time to decriminalise defamation, while introducing laws to discourage nuisance suits. “We need a law that punishes those lawsuits against journalists that have no grounds. There are some cases in which politicians, powerful people, or those under investigation, use defamation as a means of intimidation,” he told WAN-IFRA. “The lawsuits have a chilling effect. (They) force the paper to drop their interest in the matter threatening them with endless court cases and high legal costs.”

La Stampa spends 1.5 million euros a year on legal fees and the cases are frequently dropped by the plaintiff before they get to court. “In these cases, those who misuse libel actions should be forced to pay the news organisation’s legal fees at least,” Calabresi argues. “This is a terrible malpractice in our country.”

Furthermore, Calabresi argues that there “is no doubt” that it is time that Italy’s criminal defamation laws were abolished. “It’s preposterous that journalists can face prison for defamation,” he said. And he points to a second problem with defamation law confronting Italian Editors-in-Chief specifically. In Italy, an Editor-in-Chief is legally responsible – in some cases criminally – for everything that appears in his or her newspaper under a legal clause known as “omitted control.”

“I am personally responsible for whatever is published in the national edition, all the local editions, website, tablet app, blogs, supplements. I have hundreds of trials open,” he said. “La Stampa every day produces – counting just the editorial content, not the advertising – 160 pages of local editions, 40 pages of national editions, plus the website, social media, supplements, blogs… The idea that I could be personally responsible and check all this content is ridiculous,” Calabresi asserts in exasperated tones. “How could I possibly verify all this every day? Today an Editor-in-Chief is an overseer of a complex world. This law is a reflex of a past world. We need to update some laws.”

Mario Calabresi will be participating at the World Editors Forum in Torino, 9-11 June.