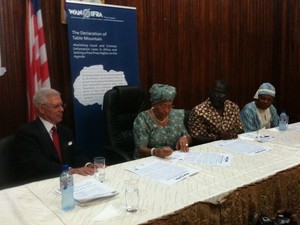 Mr Costa was sent to Monrovia’s Central Prison on March 21st on charges of “Terroristic Threats, Menacing and Criminal Coercion” after his lawyers failed to secure a bond – demanded in US dollars – for his release.

The broadcaster had issued an on-air challenge to fight the president’s son in response to the National Security Agency head’s repeated threats which had allegedly been privately communicated to the radio host.

Liberia’s Centre for Media Studies and Peacebuilding has issued a statement confirming that Costa was released on Monday after his lawyers secured a bond of an undisclosed amount.

Two days before Costa’s arrest, Meston took part in a high level meeting in Monrovia, where the Liberian authorities agreed to expedite to the parliament draft legislation for the repeal of criminal defamation laws, in line with the Declaration of Table Mountain.

The timing of Costa’s imprisonment has compounded WAN-IFRA’s disappointment “… it was only last week we met with government officals who gave us assurances that press freedom and the repealing of laws which restrict fredom of speech were a top priority on the legislative agenda,” Meston said.

“Is the Sirleaf government prepared to work with civil society to urgently repeal these laws and repair its reputation as an open government, or are they turning the clock back to a time of government control over the press?” Meston asked.

The charges are viewed as being consistent with recent attempts to cow journalists using anti-terrorist legislation, highlighted by a new UNESCO report issued this week.

“WAN-IFRA is keen to work with the government to ensure that it honours its commitments of signing the Declaration of Table Mountain in 2012 by repealing laws which criminalise speech, and not using anti-terror legislation to jail journalists or social commentators,” Meston concluded.