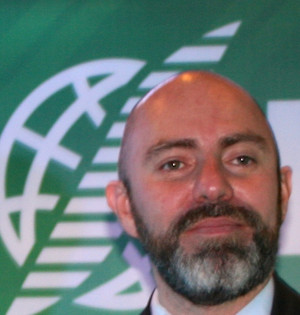 “I would describe myself as a journalist – that’s my passion.”

Carvajal will bring that passion to his role as main moderator of Digital Media Europe 2014, 7-9 April in London.

Working as the Content Manager for the ICCK group in Colombia, he focuses on giving the digital dimension to content, whether that be from print (the noted El Espectador newspaper), television (Caracol TV), football news (Gol Caracol), radio (Bluradio), or film (Cine Colombia). That, of course, gives him unique insights on media convergence.

“Before digital I worked in radio, TV. I worked at CNN. I also went and set up a BBC radio station in Ecuador and I worked at El Tiempo [El Espectador’s chief rival].  What I have learned over 10 or 12 years, and what drives me, is that nothing is 100 per cent invented already – to a certain extent everyone has to make it up as you go along.”

His background in traditional media gives him a broader view of convergence, without the blinkers of those from a purely digital background. He may be an evangelist but he is not a zealot.

“The digital guys used to be the pretty boys from the best universities who didn’t really care about profitability and would arrive and tell everyone, ‘You’re obsolete; I’m the future’. That led nowhere. In fact, it often led to two different teams for the same brand,” says Carvajal.

“We find that people don’t understand or care about the imaginary divisions and borders between media. They don’t say, ‘I saw this on Caracol news, or tablet, or Twitter’. They just say, ‘I saw this’. They don’t care where. The only way to tear down the walls in news and business is to understand that you work for a brand. Digital potency doesn’t mean cutting and pasting [to a different medium]; it means new editing and changing attitudes, which are usually only accepted by traditional media when they begin to understand the increases in audience reach and engagement.”

Many of the paths of convergence seem to lead to video, despite the expense, a fact that Carvajal acknowledges: “It is a lot more expensive and brings many new costs when you pay for a video platform, but it also the most profitable advertising potential that a news group has in digital – so you pretty much have to.”

However, he is also keenly aware of the number of failed experiments of print news operations going into video and stresses, “I cannot emphasise the importance of relevance enough. Video gets more attention, but the key is always relevance, and all too often you get a print-journalist approach to video, which leads to redundant content that gives you no desire to hit the ‘play’ button.”

News is 70% of online traffic in Colombia

In addition to his personal insights, Carvajal also brings with him the perspective of the Latin American market he has worked in.

“We are an emerging market, and it’s not that we believe we are out to teach other regions, but we do have the advantage of seeing what is coming before it hits us, because we keep watch on how it plays out in other markets. An example of how that can help is that we have an association of newspapers in which four of the main players sat down together and said ‘OK, so Google, Facebook and Yahoo are coming for us – but we are the ones with the news and news is 70 per cent of online traffic in Colombia. So let’s not have Adwords but instead create our own ad network.”

In addition to the chance to learn from other markets, Carvajal notes that the Latin American markets have one other attribute: “We have a disadvantage that has become an advantage. We just don’t have the resources the big guys have, which means we have had to be more resourceful and less demanding in terms of investment.”

More from less? Relevant content rather than scatter-gun video? Lessons learned from the leaders? Put those approaches together and they add up to a potent critical perspective on convergence for whatever market you are in.