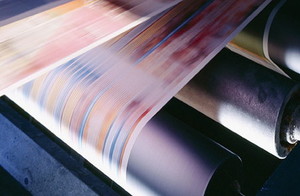 And therein lies a dilemma for newspaper companies: as they pivot to “digital first,” print often gets left behind, even as it continues to provide the bulk of both influence and revenues in the news media world.

Revenues? Despite the emphasis on digital, digital platforms account for around 5 per cent of newspaper company revenues globally.  “Digital First” cannot mean “Digital Only.”

Nobody reads newspapers anymore? More than half of the world’s population reads a daily newspaper today; more than 2.5 billion in print and more than 600 million in digital form. Newspapers generate 200 billion dollars in revenue globally.

“You cannot go a day without some industry Cassandra predicting the doom of print. Interesting notion, when the vast majority of publishers across the globe still rake in most of their revenue from the print pie,” said Vincent Peyrègne, the CEO of the WAN-IFRA, in his Printing Summit opening remarks.

There is no doubt that digital investments are necessary for today and in the future, and the bulk of innovation in the news industry is occurring in this sector – the stellar programme for the upcoming Digital Media Europe conference attests to this. But, as the Printing Summit shows, there is room for innovation and growth in print as well.

Participants from 18 countries are attending the conference, which continues through Thursday and focuses not only on technical aspects but also on business innovation, the power of print, news consumer engagement and digital printing.

“It is important to develop innovative business concepts that make use of these opportunities in the interest of competitive cross-media news products, combing print and digital media in a convincing offer to the market,” Mr Peyrègne said.