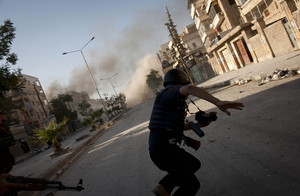 A correspondent for the Qatar-based Al-Jazeera Arabic news channel, identified as Medyan Dairieh, runs after being injured in the leg across a sniper corridor during heavy fighting in the Saif al-Dawla district of Aleppo on August 24, 2012. Syrian forces blitzed areas in and around the northern commercial city, destroying a number of homes, activists said, as Western powers sought to tighten the screws on strongman Bashar al-Assad. AFP PHOTO / JAMES LAWLER DUGGAN

In an account of his 152 days in captivity, Italian journalist Domenico Quirico, released in September 2013, wrote in La Stampa newspaper “In Syria, I discovered the Land of Evil.”

Since 2011, an unprecedented number of journalists have been abducted in Syria. The Committee to Protect Journalists (CPJ) says at least 30 journalists are currently being held, while 52 have been killed since Syria‘s civil war began in 2011. CPJ also report that at least 24 other journalists who were kidnapped earlier this year are now safe. Reporters Without Borders has documented higher figures, saying at least 60 “news providers” are detained and more than 110 have been killed. Regardless of the discrepancies, Syria is currently the most dangerous beat for journalists of any nationality.

CPJ researcher Jason Stern says the kidnappings in Syria are unprecedented in scale. “Simply no other country comes close.” Jihadi groups are believed to be responsible for most of the abductions, but militias supported by the Assad government, criminal gangs and rebels, and the Free Syrian Army have also been implicated. The abductors are thought to be holding hostages for ransom or as pawns for political negotiations.

“Every time a journalist enters Syria, they are effectively rolling the dice on whether they’re going to be abducted or not,” says Stern.

Currently only ten abducted foreign journalists have been identified by their families or employers: two Americans, four French, one Lebanese, one Jordanian, one Spanish and one Mauritanian. Those who remain missing are a combination of foreign and Syrian journalists, whose names have not been publicly disclosed due to security concerns.

In order to warn other journalists covering the conflict in Syria, CPJ took the bold step of disclosing the number of kidnappings but made sure not to disclose any information on the captives themselves. “Blackouts can have an unintended consequence of camouflaging the actual dangers of the situation,” Rob Mahoney, CPJ deputy director, told The Atlantic in a November 2013 interview. “It was in the interest of everyone that the scale of the problem be demonstrated.”

Among the longest-held captives is American freelance journalist Austin Tice, missing since August 2012. He disappeared while reporting on the conflict for McClatchy, The Washington Post, CBS and other media outlets. An amateur video was released on YouTube showing him with armed men. The 47-second clip shows the journalist blindfolded and muttering an Islamic prayer before crying out in English. Independent analysts suggest the captors in the video appear to be pro-regime forces imitating a militant Islamist group, an often-used technique to pin abductions on opponent forces.