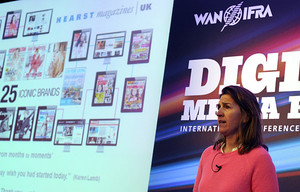 That’s how Rebecca Miskin, as Digital Strategy Director for Hearst Magazines UK,  summed up the challenges of forging digital transformation in today’s breakneck digital world during her Digital Media Europe presentation in London.

Despite that hint of uncertainty inherent in today’s digital environment, Miskin and Hearst have succeeded in transforming its digital portfolio in the last three years, including increasing its mobile traffic by 70 percent to its array of platforms.

Miskin is in charge of developing digital strategies across all brands (including Cosmopolitan, ELLE, ELLE Decoration, Esquire, Good Housekeeping, Harper’s Bazaar, and pureplay sites like redonline, allaboutyou, digitalspy, handbag, netdoctor, sugarscape and triathletesworld) in the UK.

Miskin was speaking in the session dedicated to identifying “Your Top 5 Digital Priorities.” Clearly mobile sits near the top of that list for Hearst.

But first, the company needed to lay the foundation to reach new heights and identified five critical transformation success factors, “seen through the lens of digital”:

3) Build for the customer

She chose to focus on culture and planning during presentation as they have been “the cornerstones of what we have built to date.”

Fundamental to this meant cultivating a learning environment. “We are all learning. All levels of the hierarchy are learning and we need to share with everybody. Break down silos. But perhaps one of the most valuable things you can do is ‘post mortems’. Review everything you do without being non-judgmental. That will be so important for you tomorrow, a week later or even a year later.”

Recruiting the right people who are hungry, have real expertise and passion is crucial she says. “You cannot buy passion. You can’t force people to be curious.”

The company used it Digital Spy DNA, she says, to find the right breed. More on that later…

With everything they launch, it has to built for the customer – “it’s raw, it will not be perfect…but then listen to the customer, improve, iterate and learn.”

Then there is “minimum viability. This guides our prioritisation and underpins a ship often/iterative culture. If we have a cultural aversion to complication, then we are getting closer to favouring simplicity.”

This second success factor focuses on the goal of building centres of digital excellence to support the expected growth. There must be built-in measurement to everything that is done. And, of course, the technical infratructure was a given, creating new processes and workflows, which are often forgotten, she says.

Putting mobile on the map with Hearst

The very premise of Hearst’s mobile strategy begins with this, says Miskin: “When it comes to mobile, we build for people not for mobile.”

With the massive mobile audience out there, she says trusted and social brands tend to cut through the noise and that has clearly worked to Hearst’s advantage.

One of those brands is Esquire magazine. “Quite simply, I am afraid to say, Esquire was a magazine brand that 18 months ago did not have a real website let alone a tablet or mobile manifestation of the brand.”

So Hearst set out to find out who is the Esquire reader? Typically, he is on the run, wired in, has a good sense of style, career-oriented, enjoys shopping for clothes, mobile in every sense of the word, and will pay more, for example, for good wine or beer.

After understanding this, came defining when should their Esquire moments occur, ultimately “understanding where we could fit into his routine and when he would want our content and on which platform.”

They launched a weekly paid edition, a “big black book,” sort of a bible for a successful man’s lifestyle both in print and digital, and a series of exclusive parties.

Digital Spy was founded in 2001, combining a network of sites about digital TV, broadcasting and programming into a new destination for news and conversation about entertainment, technology and the media. Now in its 13th year of operation, Digital Spy serves over 145 million pages to more than 20 million people every month (Google Analytics).

“Two-thirds of the audience we are trying to reach have never heard of Digital Spy. The other third live breathe it. They are addicted to it.”

In five weeks, Hearst launched “a flawed yet simple redesign” of the website and other products using hackathons as a main incubation process to get the word out.

“Our audience screamed us, but we were engaged, improved, iterated. But it succeeded.” Audience went up 34 percent, she said.

Miskin says mobile in the future offers unlimited and unimagineable opportunities. The key is to be brave, experiment, learn, fail… and then you will succeed.