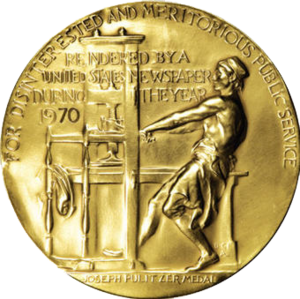 The paper’s success at the Press Awards and the widespread acclaim it received for the coverage of the NSA leaks may put The Guardian in line for a Pulitzer Prize, a claim only strengthened by Thursday’s award of the IRE 2013 medal. Last year Pulitzer administrator Sig Gissler told The Huffington Post that they had “permitted the Guardian US website to enter material generated by its US staff because it apparently had established a substantial and distinctive presence in the United States with operations in New York.” Dylan Byers at Politico raised the issue last month, writing that the trustees of the prize faced their “toughest decision in at least four decades” and pointing out that any award “would inevitably be perceived as a political act”. An award for The Guardian would make it the first ever British newspaper to win a Pulitzer.

At the European Press Prize held last month, The Guardian also received recognition for its work: Editor Alan Rusbridger and Wolfgang Buchner of Der Spiegel were jointly awarded the Special Award for “their persistence and courage in publishing the NSA stories.” Turkish journalist Yavuz Baydar also received the award, as a “symbol of support for his fight for free press.” The Investigative Reporting Award went to Steve Stecklow, Babak Dehghanpisheh and Yeganeh Torbati for their Reuters piece “Assets of the Ayatollah.”