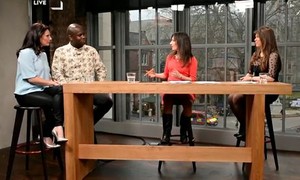 The Guardian’s Mark Lawson wrote that London Live’s stance on diversity “will shame its rivals.” The new station carries programmes like Not the One Show, with its unusually ‘diverse’ panel consisting of three women and a non-white man offering a stark reminder of the continuing underrepresentation of women and ethnic minorities in British broadcasting and print journalism.

Here, the Editors Weblog provides an overview of the problems in Britain in global context and identify attempts at addressing gender and racial inequality in the news business, including:

Statistics collated by the New Statesman show the extent of the problem regarding racial inequality in UK media. In a country where 16% of the population is non-white, 94% of British journalists are white, as was every editor of a daily national newspaper until the appointment of The Independent’s Amol Rajan in June of last year.

The annual American Society of News Editors census shows that the gap is even greater in the United States, where the percentage of minority staff in newsrooms is 12.37% (28% of the US population is non-white). There has been no improvement in over a decade. And research by Germany’s Zentrum für Mediale Integration indicates that the 19% ‘immigrant’ population in the country only occupies approximately 4% of positions in the media. The picture in Australia is similar, while in South Africa a survey of nine newsrooms revealed that 55% of editors were black.

Where are the women?

But the racial profile of newsrooms isn’t the only problem – women don’t fare much better. A 2012 study conducted by Women In Journalism revealed that over 75%, and in some cases up to 90% of British daily front pages were written by men. Britain has only ever seen one female editor of a daily broadsheet: Rosie Boycott was Editor of the The Independent for three months in 1998. In the US, a recent study by the Women’s Media Center shows that in every major form of journalism, 60-65% of content is produced by men. When these statistics are broken down, it shows that the gap is even greater in ‘heavyweight’ areas such as politics and business. And the results of Australian research indicate a remarkably similar imbalance there. The recently-launched French initiative Prenons la une (‘Take the front page’) points out that although 40% of French journalists are female, only 18% of panellists on news shows are women. And in South Africa, 55% of editors in the nine newsroom study conducted in 2013 were identified as women but national newspaper figures reflect the global norm, with only 31% of editors being women.

All this despite more women pursuing a career in journalism. In her book Women and Journalism, Suzanne Franks acknowledges that women are well represented in journalism degrees and at entry level. “However, figures for later stages continued to show male dominance in the newsroom.” Franks points out that research shows similar trends across the world: in Australia, Romania, Lebanon and South Africa. Even among students studying degrees other than journalism, women contribute to university newspapers around twice as much as men. Yet in the upper echelons of a major newsroom, men still dramatically outnumber women and produce far more of the content.

What are the causes of these persitent problems?

Hilly Janes, writer and former senior executive at The Times, The Independent, and Prospect, attributes much of this drop-off to the working environment in newsrooms, where the more demanding roles require employees to work long, irregular hours – making it hard to juggle work with the primary care roles women continue to take the lead on: “…women who take career breaks can lose confidence and with the advent of ever changing digital and social media it is much harder to keep up, which saps their confidence even more.” Janes told WAN-IFRA. She points  out that areas with more “family friendly hours” are far more likely to have “women dominating at every level”. Janes echoes the views of Financial Times’ Head of Operations, Lisa Macleod who is balancing a high profile media management career with motherhood.

The reasons behind absence of ethnic minorities in journalism are harder to pin down. In Germany, the ZFMI speculates that immigrants are more inclined to pursue careers in engineering or medicine in an attempt to elevate their social status. But Samantha Asumadu of Media Diversified told WAN-IFRA that newspapers are simply failing to foster the talent available to them in minority groups, arguing that there is “no shortage of platforms” for minority writers and that “while many of these papers have intern programs where they encourage diverse applicants, the higher you go up, the fewer ethnic minorities you see. We’re perpetually in training but apparently never fully developed professionals.” As London Live shows, the journalists are out there – it’s just a case of going out and finding them.

For some, the only way to make concrete improvements is to enforce them. Speaking to the Columbia Journalism Review, Chris Hayes, whose show Up With Chris Hayes gained plaudits for the diversity of its guests, explained that they took a rigorous approach to ensuring that it wasn’t simply populated by white men: “We just would look at the board and say, ‘We already have too many white men. We can’t have more.’ Really, that was it. Always, constantly just counting. Monitoring the diversity of the guests along gender lines, and along race and ethnicity lines.” And it worked.

There are other solutions – Asumadu does not support the use of quotas but would “advocate blank name CVs”, arguing that “there is growing anecdotal evidence that UK firms are filtering out job candidates with foreign-sounding names”. But that won’t be enough, especially when “getting jobs in the media is often about who you know, where you studied and contacts made once you’re in. We need an overhaul of the culture.” With Media Diversified’s group of writers, Asumadu is hoping to do just that by giving editors the tools to find writers from different backgrounds. There has already been a response from some parts of the profession, and she hopes that the directory they’re currently funding through a Kickstarter campaign will be a “game-changer for online, print and broadcasting.”

Media Diversified echoes similar campaigns to increase the use of women experts as sources and guests. Part of the WMC, www.shesource.org describes itself as “an online braintrust of female experts on diverse topics to serve journalists, producers and bookers who need female guests and sources”. Last year, the BBC academy ran workshops to train female experts with the same goal.

What many campaigning for greater equality stress is that it’s not just about equality for equality’s sake, but widening audiences and improving journalistic standards. Speaking to The Nation, Glenn Greenwald explained why diversity is so important to newly-founded The Intercept: “One of the problems of old media organizations is this incredibly homogenized, narrow range of viewpoints that get expressed… I honestly believe that in order to be an interesting, vibrant, provocative, innovative news organization you absolutely need diversity, in the people who are editing, and in the people who are writing the journalism.” It’s a view echoed by American talkshow host Chris Hayes: “Diversity produces people with a specificity in their world view, and it benefits the product.” It could be an important lesson to take on board for an industry sometimes struggling to remain relevant and in touch with its audiences.

There is clearly a large pool of talent readily available to editors and executives – it’s just a question of tapping into it, and London Live could be the impetus in the UK. As Mark Lawson concludes in The Guardian, “Lebedev’s (London Live’s backer) entry into telly won’t frighten existing broadcasters artistically, but it may make them aware of how relatively old, male and white they look” – and the same might just go for newspapers and online start-ups.