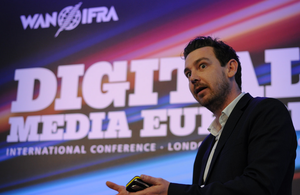 Lisa MacLeod, Head of Operation at FT.com pointed out the importance of focussing energy on mobile: “The rise of mobile traffic and content makes us wonder about what will happen with desktop. In many parts of the world, they will never, never experience the desktop, instead they are or will access their content via mobile.”

Rebecca Miskin spoke about the importance of a fresh perspective when developing a mobile strategy. The Digital Strategy Director at Hearst Magazines UK said that “when it comes to mobile, we build for people not for mobile”.

An example she gave was Esquire magazine. They examined the lifestyle of the typical Esquire reader: “He is on the run, wired in, has a good sense of style, career-oriented, enjoys shopping for clothes…” And in response they launched a “big black book”, a ‘bible’ for successful, modern men. The digital subscriber base doubled and digital revenue quadrupled in the wake of the launch.

The importance of video and how to do it

“Video might not be what attracts our young audience to our site, but it is what keeps them coming back,” said Martin Clamart, Head of International for the MeltyNetwork in France.

“Video is a massive opportunity to be creative, formats are still evolving. Be live, fast, clear, concise, direct and authentic and you will drive views,” Herrmann concluded.

At Sweden’s Aftonbladet, the important thing has been to keep focussed, according to Kalle Jungkvist. “Over the years, what we’ve found is that when we keep razor sharp focus on Plus [their premium content], it’s been very successful. A few years ago we took our eyes off the ball, as we were reorganising the newsroom, and it immediately impacted Plus – we lost some 50,000 subscribers over two years.” Some of Jungkvist’s key points were to encourage cooperation between departments, using data effectively, and focussing on mobile.

“Whereas people spend time on other social networks, they invest time on LinkedIn, and for you as news publishers, working with LinkedIn means access to a more interested and engaged audience than you get through Facebook,”  Isabelle Roughol, Editor at LinkedIn in France, told the conference. The company is building its content strategy by bringing out line of content products, such as Influencers – opinion pieces written by a group of about 500 top thought leaders. She gave the example of Qz.com, who are “saying that the traffic they get from us is more engaged and come back more often.”

Native advertising and getting rid of banners

Several speakers talked about the importance of moving away from traditional methods to native advertising, and effectively targeting users. Regan Senkarik, Senior Director of Channel Sales at Yahoo, told the conference: “We see an enormous lift of performance of ads when we do our deep personalisation, and an even higher lift when we move away from banners.”

The importance of sophisticated targeting was echoed by Mark Foster from Adello. He even suggested weather could be a parameter: “It turns out that once you get to 15–16° and it’s sunny, people start booking test-drives with Harley-Davidson.”

Will Hayward at Buzzfeed also rejected the use of banners in favour of more native advertising, something he feels publications should be frank with their users about “I think there will be a split, I think those who somehow try to disguise the fact that it’s sponsored will struggle with their business.”

Amedia’s Vice President Digital Ben Christensen spoke about how the Norwegian company cut out ad networks and took control of their user data. Amedia has acquired Norway’s largest blog platform and largest yellow pages site, “which means we get a lot of data about what users are searching for. We have total control of the data in this network of sites, and from this we create value for our advertisers.” Amedia are able to produce more effective advertising, as well as take a bigger cut.

Mark Foster argued that organisations were taking the wrong approach to data: “What nobody is doing yet, is making the meaningful connections for consumers, based on all this data. What I mean is that, instead of trying to extract more value from your mobile users by creating targeted ads, you should be creating value for the user, by serving him or her more meaningful experiences connecting the data you have on him, with data from other parties.”

Finally, the conference also hosted the European Digital Media Awards. The ceremony recognised the innovative coverage of surveillance and data security by papers including The Guardian and Norway’s Dagbladet, alongside prizes like Best Mobile Service and Best in Tablet Publishing.