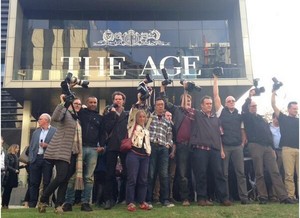 These latest cuts – predominantly affecting photographers and sub-editors – amount to a 10% cull of editorial staff. They follow the axeing of 1900 Fairfax Media jobs in Australia through redundancy in 2012. Half of them were editorial positions.

Miki Perkins, a journalist with Fairfax’s flagship Melbourne newspaper The Age, live-tweeted the meeting called by the paper’s Editor In Chief Andrew Holden to announce the cuts to staff.

Holden says “you know this is a business going through fundamental change and there are shitty parts to that.”

Staff member says the subbing quality has gone down, lots of errors. People are worrying about diminishing quality.

Another from The Age wrote: “Another step closer to a Murdoch-only media landscape… To say the mood in the newsroom is bleak would be an understatement. Death by a thousand paper cuts. Incredibly sad.”

As the staff voted to strike for 24 hours, the Media Entertainment and Arts Alliance (MEAA) Federal Secretary Chris Warren described today’s announcement as “…an assault on quality journalism”, and would further erode the ability of editorial staff to do their jobs.

82 people are talking about this

However, one of Fairfax’s Managing Directors, Allen Williams, emailed staff, warning them that they may be sacked for taking strike action: “In addition to docking a minimum of 4 hours pay (as required under legislation), the company will also consider taking disciplinary action against those employees who participate in any unlawful industrial action, which may include the possibility of terminating your employment.”

Fairfax posted a (AUD) $16 million loss in the last financial year, under the leadership of CEO Greg Hywood. Earlier this month the stable’s Australian Financial Review suffered a globally embarrassing production failure, when the prestige paper was published with a series of astounding sub-editing failures on the front page.