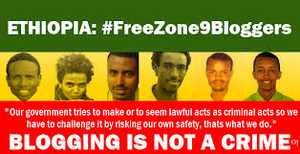 While pursuing his doctorate in the United States, Endalk recently saw six of his colleagues arrested along with three independent journalists on April 25 and 26. The detainees face charges related to accepting assistance from a foreign human rights group and “inciting violence” through social media, though no formal charges have been filed. The youngest of the collective, 25 year old Atnaf Berahane, was reportedly tortured during police investigations.

Launching their blogging collective in May 2012, the Zone 9 members had visited fellow journalists in jail and advocated for the respect of the constitution and against censorship through several online campaigns. “Our language was highly polished and polite. We did not want to provoke the government and invite them to arrest us, because we wanted to remain outside the prison and work a little bit so that we could start a discussion,” explains Endalk.

But pressures to silence the bloggers escalated; even after they decided to go offline in September 2013, they claim to have been followed. Their decision to re-engage with the online platform sparked an ultimate backlash: “In April we met and decided that even though we stopped, these people were still targeting us. So we decided to write again and wrote a comeback blog. We gave our reasons for our disappearance to the public. Then exactly three days later, all of them were detained.”

Only a month later on 26 May, Elias Gebru, the editor-in-chief of Ethiopia’s leading independent magazine Enqu, was arrested for publishing an opinion piece on the controversial Aanolee Martyrs memorial monument. Elias Gebru, who was a vocal advocate for the rights of jailed journalists, was denied the right to bail pending further investigation.

As the 2015 general elections approach, the recent arrests send a ruthless reminder to those critical of the regime led by the Ethiopian People’s Revolutionary Democratic Front (EPRDF). The country’s record for jailing journalists during such periods does not fare well. In the immediate aftermath of the 2005 elections, more than 20 newspapers were closed, and journalists arrested and convicted on charges such as treason and inciting violence.

The International Press Institute (IPI) notes in a 2008 Watch List Report that since the 2005 elections, “there has been a steadily deteriorating relationship between the private media and the government leading to a complete breakdown in relations.” During the late Prime Minister Meles Zenawi’s rule, CPJ reported that more than 70 newspapers were forced to close because of government pressure.

Since Prime Minister Zenawi’s death in August 2012, the government’s stance has remained unchanged in its intransigence towards the media. However, there is an atmosphere of growing unrest under Prime Minister Hailemariam Desalegn, who assumed office until the end of Zenawi’s term in 2015. Endalk observes that “Since the death of the late Prime Minister Zenawi you can see that people have started to complain, and there is this public demonstration that was impossible before, because he was so controlling and established this system. But after his death, it is a blow to the system.”

Recent demonstrations have been met with brutal violence. Student protests in late April over the new master plan to expand the capital in the Oromia region claimed nine lives in clashes with government forces according to official figures, while other sources have reported up to 40 deaths in all regions. Given tight restrictions on independent media however, it has been difficult to monitor and report on these events. Human Rights Watchstated how “the recent crackdown in Oromia highlights the risks protesters face and the inability of the media and human rights groups to report on important events.”

“When you work as a journalist here you have to expose many things: there is the human rights issue, you can talk about those who are still in jail… And when you report on such critical issues it is obvious the authorities are not happy,” comments Dawit Kebede, editor of the online journal Awramba Times, which used to run as a newspaper from 2008 to 2011. In reporting the student protests in Oromia, Dawit deplored how hard it is to gain access to government officials and opposition groups to investigate issues on the ground and ask questions beyond official statements.

Dawit Kebede, a 2010 Committee to Protect Journalists International Press Freedom Awardee, was among those journalists detained in the aftermath of the contested 2005 elections. After spending nearly three years in prison each on charges of “inciting and conspiring to commit outrages to the constitutional order,” he was released in 2007 on a presidential pardon, amid strong international pressure from the United States and the United Kingdom.

The absence of a respectful discourse between the ruling party and opposition groups has created a heavily polarised media environment where private media struggles to report on its own terms. “Such polarisation has created a certain kind of media. You have to be either pro-government or you have to be against the government. Our political culture means that you have to be either 0 or 100, there’s no 50,” observes Dawit. “When you choose to exercise a profession with such political polarisation one way or another that could be a cause to be labelled as anti-government, to be labelled as a terrorist, and to be labelled as someone who commits high treason.”

On the other hand, Endalk comments how journalism is often perceived by those in power as government reporting, creating a “development ideology” effectively using their media: “when you are a journalist you have to build a very good image, build a country brand, not to tarnish the image of the country by talking about bad things, by talking about lack of good governance. This would tarnish the image of the country and the government. So when you are being told to do so you are forced to be an activist.”

Legislation has further institutionalised control of the media and has been used to override existing norms regulating the media in Ethiopia in the name of security and stability. The Mass Media and Freedom of Information law ratified in July 2008 legalised certain restrictive practices, allowing prosecutors to summarily stop any publication deemed a threat to public order or national security, and increasing the punishment for defamation (CPJ 2008). The number of journalists in jail or sentenced in absentia rose especially after the passing of the Anti-Terrorism Law in 2009, which warns that anyone who publishes information that could incite readers to commit acts of terrorism risks being jailed for between 10 to 20 years.

While the jailing of journalists and political opponents has drawn local and international outcry, overt political interference has also been accompanied by a series of measures to thwart independent media and alternative views. A recent CPJ blog notes for example how a draft distribution system could subtly but effectively silence any critical publication ahead of May 2015 elections, according to local journalists “they aim to ensure that private newspapers and magazines are distributed through one company with links to the ruling party.”

In a country where elections have come to be seen as instruments of political control rather than devices of liberalisation, the media strategy employed so far does not fare well for press freedom and the ability of local media to report on critical issues such as human rights violations. The regime has not only sought to contain potential destabilising effects of the media, but has also crafted a system highly in tune with the government’s developmental rhetoric. With China emerging as a new ally and a “model” for a particular kind of media strategy, the Ethiopian government might not be so inclined to adopt press freedoms espoused by its traditional Western donors.

But in using repressive tactics in a highly polarised environment, it has also forced many journalists to become more entrenched in their activism, as they continue to push for more open discussions on democratic values and media freedoms. As Endalk notes, “You have to be very patient with the process and even though there are no platforms visibly available for Ethiopians to express their views, we still need to fight.”