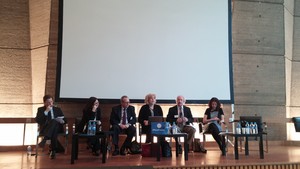 Universality, according to Thomas Hughes, Executive Director of Article 19, is “…the applicability of freedom of expression for all, without the erosion of that right with arguments around cultural relativism.”

Hughes opened proceedings by bemoaning the “slow incremental erosion over 10-15 years of freedom of expression issues.”

He said restrictions on freedom of expression were “often a proxy for promoting the discrimination of key groups of society,” and were “used to divert attention away from other issues in society.”

Catalina Botero, Special Rapporteur for Freedom of Expression at Organisation of American States (OAS) explained that this “…was one of the most difficult declarations we have done in recent years.”

Frank La Rue, UN Special Rapporteur on the Promotion and Protection of Freedom of Expression, opened by declaring, “Cultural diversity is linked intrinsically to freedom of expression.”

He described freedom of expression as a “facilitating right,” saying, “It facilitates cultural diversity. It brings about the expression of religion, of minorities, of disabilities, even those who have difficulties expressing themselves.”

La Rue then turned to the internet, and said that, today, “…it is a necessary element.” He called on all nations to make it “…accessible at the lowest cost possible, if not free”, and warned that it cannot be “at the service of any cooperation or government.”

“It will only work if it is at the service of all of humanity,” he said.

He went on to suggest that restrictions on the internet were being implemented in certain states as “political leaders are becoming more and more sensitive to criticism. This is directly linked to the power of internet.”

He concluded, “We should never accept censorship in any form, especially never to protect politicians from criticism.”

Dunja Mijatovic, Representative on Freedom of the Media at OSCE called on international organisations to have “bolder and more courageous responses to human rights abuses.”

She said there was a need to “…name, blame, and shame governments” that “don’t honour universal values.”

“We need to be ready to call out those ones that are not honouring the values, and to try and help them in order to change.”

She lamented the fact that it “…feels like we’re repeating the same issues every year,” yet concluded, “I will not shy away from saying these things.”

“This particular declaration is something I would ask you to pay attention to. I think it can open up the society, can raise painful issues, but we need to have courage.”

Barbara Trionfi, from the International Press Institute, spoke last. She claimed the joint declaration would be “very useful in defeating recent efforts of some countries to weaken the protections of human rights and freedom of expression.”

She added that “…traditional values cannot be used to shield public officials from accountability and to hide corruption.”

This was supported by Toby Mendel, Director for the Centre for Law and Democracy in Canada, as he said, “In almost every case [of restrictions of freedom of expression], it’s nothing to do with traditional values. It’s about populist politics”.

Frank La Rue had the last word of the session. He told the audience, “Sometimes a simple truth becomes the most important truth.

“Universality is a given. But when you think about it, where it is being challenged the most is with freedom of expression.”

“Reemphasising universality of freedom of expression was an essential element of this declaration, as simple as it may be,” La Rue concluded.