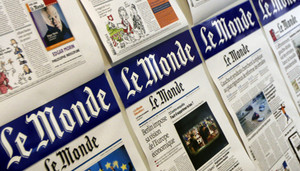 This photo taken Friday, June 25, 2010, shows recent front pages of Le Monde hanging at the newspaper headquarters in Paris. The supervisory board for France's Le Monde is meeting Monday June 28, 2010 to choose a new owner for the iconic but debt-saddled newspaper _ an owner who will take financial control out of the journalists' hands for the first time since 1951. A leading bidder, a group that includes the owner of Spain's El Pais and France's former state telecoms monopoly, said hours before the meeting that it would pull out. (AP Photo/Laurent Cipriani)

“For several months, we have sent numerous warning messages highlighting major dysfunctions and an absence of trust and communication with the management,” the executives wrote in a joint letter this morning.

“We have tried without success to reach solutions. We have realised that we are no longer able to assume the tasks entrusted to us, and that’s why we are resigning from our respective posts.”

It is believed a number of reasons are behind the group walkout this morning. Many news outlets are citing a rift with Managing Editor Natalie Nougayrède as a central factor.

A source cited by AFP criticised the paper’s management, saying, “They don’t work collectively. We never know what is going on. After a year-and-a-half, it’s not working out.”

Rival French daily Libération claims there have been “a number of disagreements and unresolved conflicts for several months,” including “disputes regarding the new style of the print edition, the tablet project, and a tenseness around the internal mobility project, with 57 posts to be reassigned.”

“Above all,” it added, “it’s the absence of communication between the chief editors and the heads of service on one side, the lynchpins of the paper, and the managing editors on the other, which is causing problems.”

In February, staff complained in response to plans to combine the paper’s print and digital staff. They claimed they had not been consulted, and were reportedly concerned about the paper’s lack of digital strategy.

According to MediaPart, a report by French advisory group Technologia last week noted a problem with “the managing editor failing to give clear responses,” and “a feeling that paper is out of breath.”

In a message this morning, la Société des Rédacteurs du Monde (The Society of Worldwide Editors) claimed there was “a global loss of confidence in the governing of the newspaper.”

“Today, there is a problem of method and of organisation,” it said. “It is high time to put in place a collective and functional management, and for those who do the work, it’s time for them to be really heard.”

Le Monde is not the first French newspaper to be rocked by a high-profile resignation. The editor-in-chief of left-wing Libération walked out in February after staff rejected his plans to restructure the paper.