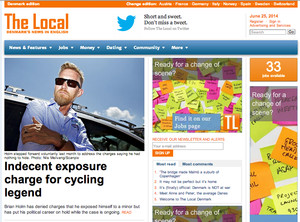 The Local CEO Paul Rapacioli told the World Editors Forum that they saw the need to serve the national news agenda of various countries to an international English speaking community that wasn’t being addressed by the big global brands.

“You have great reporting from The Economist and the New York Times but it’s very much a top down approach… [We’re trying] to give an outsider, where ever they are around the world, a real feel for what is happening in these countries on a daily basis.”

In fact, the majority of readers, up to 75 per cent of whom are from outside Europe, are using The Local as a gateway to localised European news. The Local‘s audience includes tourists, visitors, journalists, expats, diplomats, politicians, and professionals with an international outlook, according to Rapacioli.

“Given that we all lead such international, cosmopolitan lives these days, this is exactly what people need: to be able to stay connected with each other around Europe,” Rapacioli said.

The Local employs two permanent journalists for each country site, and combined with freelancers and unpaid blog submissions, they produce 10 articles for each country every day. The company’s business model is based largely on sponsored content.

The average view on each new article across the eight countries, not including the new Danish site, works out to be approximately 1800 views per day­ – a significant achievement for a niche publisher, but perhaps indicative of the information need being met by The Local.

The plan now, according to Rapacioli, is to expand globally, with opportunities showing themselves in Latin America and negotiations currently underway with partners in Asia.