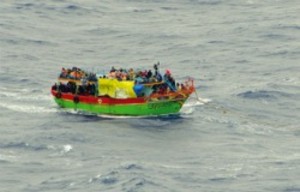 Mario Calabresi, Editor-in-Chief of La Stampa, a leading Italian daily, told the press freedom roundtable at the 66th World Newspaper Congress in Turin this week that the plight of migrants is often under reported by media who fear that they may become victims of aggressive campaigns by racists, political parties and by citizens.
(Photo: La Stampa)

“In an era of social networking, pressure on journalists is strong,” he said. “It can push newspapers into not taking sides, sticking only to the bare facts in order to avoid criticism and out of fear of being boycotted and losing readers.”

Calabresi challenges this response. Indeed, he argues that the migrant story provides one of the key challenges to show how important journalism is for the future of democracy. He uses his own newspaper’s actions to illustrate how to tell the story, with compassion, humanity and accuracy.

“The role of journalism today must be to keep alive a rational debate, to provide citizens with the tools to reason, to combat fears and to avoid being overwhelmed by emotional prejudice,” he says.

He challenges journalists not to be paralysed by populism, or fear, or irrationality or to weaken journalism by hiding or stifling the truth for fear of not being well understood.

“We must provide rational, fact-based context and we must seek to change the sentiments of people who don’t fully understand the story of migration,” he says.

But how is this done? Particularly in a country like Italy where racist sentiment can be strong and where only a few years ago, racism in media was so bad editors and journalists joined together to launch the Charter of Rome, an unprecedented effort to improve reporting of racial minorities.

“First of all it is important to act in a credible and non-ideological manner,” says Calabresi. “We must work hard to get the facts, to understand the background, and then to explain what they mean.”

He says La Stampa began this work five years ago, when the first migrant landings began in the island of Lampedusa. At that time, he says, the government of Silvio Berlusconi was in co-operation an openly racist party, the Northern League and a campaign was launched to convince Italians that the country was under siege and invasion from the sea.

La Stampa journalists began a long-running investigation to get to the truth: they found that the vast majority of migration to Italy was by land (from the Balkans) and not the sea; and that most migrants were heading for other parts of Europe, especially the north. There was no invasion of Italy.

The story took a dramatic and tragic turn on October 3rd 2013 near Lampedusa, when 366 people died in the sinking of a boat that arrived from Libya. It was one of the worst humanitarian disasters in the Mediterranean.

The Italian government responded by suspending security operations and deployed five naval vessels and 900 soldiers to prevent further tragedies by rescuing people at risk on over-crowded and unstable ships.

Earlier this year this policy was challenged during the European election campaign. Some political groups, including the Northern League, campaigned hard against the policy even though it was in line with Italy’s obligations under international law.

The aim was to poison public opinion against migrants, says Calabresi. The idea was spread that this was not a rescue operation but aimed to help illegal immigrants arrive in Italy. The drumbeat of propaganda was ominous: Spain defends its borders by shooting at illegal boats, said critics, while in Italy the military go to save them.

Calabresi said: “This propaganda plays on the fears of the Italians who think that on those boats are full of adult men who come to Italy from Africa to traffic in drugs, to steal or to carry out acts of terror.”

His newspaper’s response was to investigate, obtain the facts, explain the context, tell the truth and dispel the mythology.

“First of all we went to find the survivors of the October 3rd shipwreck and to see where they had ended up,” he said. “We found that these people were mostly young men fleeing from Eritrea and from the Army. None of them had remained in Italy. We found them in Northern Europe, in Sweden, Holland and Germany.”

Then the journalists examined the profile of the 30,000 people rescued by the navy since October. They found that there are no longer people who come from Asia (in the past especially from Sri Lanka or Pakistan) or from sub Saharan Africa looking for work. Today the migrants are mainly families with children, who are escaping from Syria, Libya, and Mali, all of areas stricken by civil war and social conflict. How you tell the story, says Calabresi, is crucial. “It is important to call everything with its proper name, journalism must use words with great responsibility: if we say that a barge has arrived from Libya with 300 illegal immigrants, this triggers in the reader a negative effect, if we explain that on that boat there are 100 Syrian families with 133 children the reaction is completely different.”

Four days before the European elections, at a moment when the debate against illegal immigrants was particularly strong Calabresi took an editorial initiative that was designed to push back the propaganda and hate and to offer a different perspective.

“I placed a picture of a boat on the front page and I wrote this article to try to overturn the readers’ perception,” he said. His article read:

Speaking of immigrants has now become very difficult; no one has the patience to listen. The more moderate remain silent, while others either say return the boats to their destination or look the other way when they sink or founder.

The question is dealt with only in economic terms: the cost of rescue and hospitality; the threat migrants pose to security or to our already ailing labor market.

We choose to argue rationally, to look at the numbers and to demonstrate that there are many more of these migrants who settle in Germany, France or Sweden. We are a land of passage not their final goal.

Then you read the story of the mother who managed to keep her eight year old son afloat for an hour, before dying when help arrived, and you feel that something is not working, both inside and outside of us.

Look at the picture on this page and you discover that on this red and green boat adrift, there are 133 children, who last night were dried, refreshed and slept under a blanket thanks to the Italian Navy, which saved them. They are Syrians fleeing from the war with their parents.

The operation Mare Nostrum has saved 30000 lives since October. Many argue this is negligence, and this assistance should be withdrawn as soon as possible. But perhaps it is also the only hand that we extend towards a series of conflicts that do not want to see.

Our national sport is to run Italy down, to say the country sucks, that there’s nothing worth defending. But what if our redemption lies in rediscovering that we are capable of humanity? I will probably draw a fair share of criticism, but I want to say that I am proud to belong to a nation that sends the military to save families and not to shoot them”.

Calabresi took an editorial risk, but he says it was worth it. “I received some insulting comments and some accused me of being irresponsible, but at the same time I received hundreds of emails and messages on Twitter or Facebook thanking me.”

He says the experiences shows that media must take up the challenge. “The immigration problem exists and must be dealt with,” he says. “But the role of a newspaper should be to keep the debate on the right track. We must keep it rational and never be intimidated or scared off by the aggressiveness of politics or the social networks.”