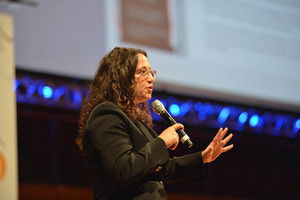 “The way newspapers continue to go wrong is because they keep making content for the device,” notes Amy Webb, (pictured) a digital media futurist and founder and CEO of the US-based WebbMedia Group.

Instead, she says, the efforts should be geared less toward the device and more about customer convenience.

Webb says her company spends a lot of time talking to people to find out not only what devices and technologies they are using but also how they are using them, such as which apps they use the most, as ways of predicting future scenarios.

Move away from the assembly line

“Innovation is day-to-day business,” says Thiago Medeiros Ribeiro, Digital Product Manager of Brazil’s RBS Media Group. “In a way it’s like a hackathon, because there are a lot of people in our company working together and coming up with new ideas to solve problems.”

RBS also made the decision to collaborate with a university in order to achieve and maintain the level of innovation that they were aiming for. In doing so, they have been working together with Eduardo Campos Pellanda, Director, Ubilabl/PUCRS, who also spoke during the session.

Among the areas that RBS is examining is the consideration of the size of a device’s screen and the types of content that users consume on it. For example, a small screen size tends to be very personal, whereas larger screen sizes are more social.

Ribeiro and Pellanda also say in order to more easily and regularly innovate, newspapers need to change the assembly-line fashion in which many of them work towards something more lean and modern.

Why Sony didn’t invent the iPod

Another newspaper company that has done quite a lot of innovating in the past several years is the Financial Times, which now has more digital subscribers than print subscribers – and the highest number of paid subscribers in the paper’s 126 years, says Andrew Betts, director of FT labs.

“Entrenching an old model is never a good way to embrace change,” Betts says, and notes that Sony didn’t invent the iPod because it wanted to protect its existing products and the brand it already had. Apple didn’t have that issue, and the rest is history.

The FT wants “to extend our reach as much as we can into as many platforms that will have us,” he says, adding “we want to be able to mix up content across platforms.”

Furthermore, Betts says the FT sees componentisation as important in developing products across devices and platforms. He explained that this is a bit like the difference between a contractor building a house from scratch each time as opposed to building the second and subsequent houses with ready-built rooms that can be put together in only a day.

WAN-IFRA Director of Publications Dean Roper contributed to this post.