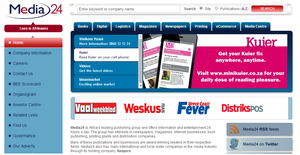 Naspers was founded in 1915 by ‘southern’ Afrikaner Willie Hofmeyr as a social, economic and political experiment in ‘tribal’ empowerment.

Through every decade, Naspers has maintained an “adapt or die” attitude which has allowed the company to survive change.

This philosophy laid the foundation for the critical moment in the mid-1980s when successive CEOs Ton Vosloo and Koos Bekker realised newspapers were bleeding to death because television was perpetually taking away from their advertising income. Their solution: an encrypted pay TV service called M-Net.

One of Naspers’ most successful ventures, Media 24, is described as “Africa’s leading publishing group” which offers information and entertainment 24 hours a day. Fergus Sampson, who is the Chief Executive of Media 24’s newspaper division, recently gave a rare interview to The Media published in their June issue. When it comes to the responsibility of print products and the ever-increasing costs of editorial production and distribution, the best way to deal with it is to “Work smarter. Find the most cost-effective and shortest route to the customer”.

Looking toward the future, he believes Naspers “must complete the transition to digital media and create a stable portfolio of news products – both physical and digital.” Once he has overseen the influential newspaper group’s transition to digital, Sampson told The Media that he plans to “build new and exciting things”.

Koos Bekker recently retired as Naspers CEO and he has been succeeded by Bob van Dijk. In April 2015, Bekker will return from a year researching the industry to suceed Ton Vosloo as Nasper’s Chairman of the Board.