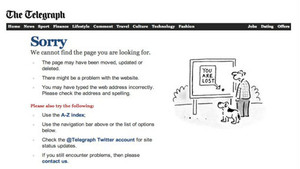 The article, which relates the removal of links to a number of historical Telegraph stories on Google, was until today undiscoverable. The article came up on a Google search, but clicking the link redirected readers to an error message on The Telegraph’s website, saying, ‘Sorry – we cannot find the page you are looking for’.

Marketing Land and The Washington Post reported the mysterious redirection on Friday and the problem persisted yesterday. However the article is now available again. Was this a move in protest at the suppression of information on search engines, or simply an ironic technical fault?

The controversial EU ruling, upholding the individual’s right to request the removal of information, came into force on 13 May of this year.

Brought to the European Court of Justice by Spanish courts, the ruling applies in contexts where information is ‘inaccurate, inadequate, irrelevant or excessive’. The law stipulates that its application must be balanced against media rights and freedom of expression. In such disputes, it is up to the organisation to prove that the information is still relevant, rather than being left up to the complainant to prove that it is not.

Google is the search engine favoured by over 90% of internet users in a number of EU countries, according to MVF, and it reported in July that it had already received over 91,000 requests for the removal of information, over 50% of which had been approved.

The ruling has been criticised as suppressing freedom of expression by many experts, with the UK’s House of Lords branding it ‘vague, ambiguous and unhelpful’ in a report published in July. Meanwhile, leading CIA technical expert Dan Geer has argued that the law does not go far enough in an age where everything leaves a digital footprint. In his keynote speech at the Black Hat security conference, last week, he argued in favour of the ‘right to misrepresent yourself’, lamenting the ‘tidal wave of observability’.

The Guardian has reported that it has been notified by Google of the removal of six of its articles from search results, and Wikipedia has recorded five such notifications, although search engines have no legal obligation to inform websites when they remove links. The Telegraph has gone further, today publishing a page which catalogues stories removed from search results.

Google claims that removals only apply for searches using a complainant’s name and that original pages remain untouched online. Thus, the top search result on Google for ‘google right to be forgotten requests’ is currently an article about one such request, containing details of the original news story.