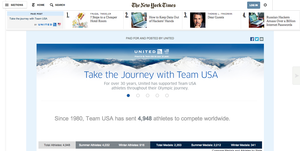 Where thick banners that bordered all sides and repetitive use of logos once drew the ire of marketers, who saw the labeling as too blatant, a thinner floating banner accompanied by smaller logos are now being used as markers at The Times.

A spokeswoman from The New York Times, described the change as an evolution and pointed out to AdAge that the new banner was floating so that a story now, “includes a consistent header that remains regardless of where the reader is on the page.”

For Australia’s Fairfax Media, advertising revenue is an increasingly urgent goal. The media company is entering a brand partnership with the popular liquor store, Dan Murphy’s. Fairfax director, FX and partnerships, Ainslee O’Brien told TheNewspaperWorks sees the partnership as a result of the fact that, “Advertisers want solutions that add real value – gone are the days where we just badge things.”

The partnership will see Dan Murphy’s wine recommendations next to recipes and editorial provided by Fairfax writers, as well as drink reviews accompanied by the option to buy the drinks online.

Earlier this year, Andrew Holden, the Editor-in-Chief of The Age, a Fairfax publication, told the World Editors Forum, “Trying to slip something in by sleight of hand is a recipe for disaster.”

His advice for publications considering native advertising is to be transparent, with both the audience and with journalists. “Journalists understand a company’s commercial imperatives, but they also know that their own value is based on credibility – as soon as readers feel the journalism is compromised, then the journalist and the company lose that credibility.”

As it is for The New York Times, it is unlikely that native advertising will disappear anytime soon. An increase of 3.4% in the digital-ad revenue during the second quarter was a silver lining for the publication, which was faced with sagging print sales.

In late 2013, Public Editor for The New York Times, Margaret Sullivan, wrote, “The Times has high hopes for this effort. Mr. Mark Thompson, the paper’s CEO said he is hoping for ‘eight figures’ – tens of millions of dollars – in advertising revenue. That won’t be immediate, he said, but it’s not in the distant future either.”

But the caution about native advertising that Sullivan expressed in the same article will likely still resonate with editors: “That, of course, is the $20 million question. Can The Times really do both? Can it be conservative in its approach – heavy on the labeling and disclaimers, careful never to confuse – and still draw advertisers? Or will that very clarity defeat the purpose of a form that has bafflement at its very heart?”

Publisher spend: A bigger focus on the newsroom