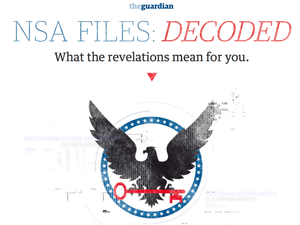 The Guardian’s entrancing and hugely successful digital story, ‘NSA Files: Decoded’ left its viewers captivated. The meticulously crafted story, which was published in October 2013, centered on the discoveries of the Edward Snowden case and gave audiences the opportunity to understand its relevance through a non-linear combination of text, graphics and video.

Andrew Nachison, founder of WeMedia, believes that not only is NSA files and its counterpart stories such as The New York Times‘s “Snow Fall” a refreshing change to the complicated and often messy looking news pages we so often browse online, but they are an insight into the future of online journalism.

Virtuoso online stories may be rare, but they are relevant.

In the World Editors Forum’s report on Trends in Newsrooms, Nachison said that although senior content and strategy executives are increasing the amount of interactive data tools used in regular features, mega-stories such as “NSA files: Decoded,” are unrealistic for everyday stories given the expenses they carry and the difficulty involved in creating them. The mega stories, he says, “show us not only what everyday stories could look like, but what using them could feel like.”

Nevertheless, the concept has its critics. Khoi Vinh, former Design Director for The New York Times, believes that NSA Files: Decoded and Snow Fall are nothing more than “superfluous bells and whistles.”

But The Guardian U.S. Interactive Editor, Gabriel Dance disagrees. Speaking to Nieman Lab’s Justin Ellis, he said, “It’s our challenge to engage our readers in a way that captivates them. And the idea I can captivate them while telling them this incredible story, there’s no reason I shouldn’t be able to captivate them with such an insanely interesting story.”

When The Guardian’s US editor, Janine Gibson spoke with WAN-IFRA’s Julie Posetti in May this year, she praised the approach that Dance and his team took, saying that the project was about delivering understanding to readers of “how this affects them.” She sees the piece not as an online story with videos thrown in carelessly, or something “meant to be marveled at more than they are meant to be read,” as Vinh claims; rather she believes the multimedia aspects told the story, with the worded pieces of the story akin only to “captions in a gallery.”

The more simple interactive news stories are, the more appealing they will be to readers.

Web productions and interactive stories are often confusing for users. As Nachison points out: “Websites are often limited, and sometimes crippled, by chaotic and unforgiving templates, awkward publishing tools, conflicting business goals and the relentless crush of continuous production.”

When The Guardian revealed “NSA Files: Decoded” to the world, it was published in a simple and intricate format, free of advertisements and unnecessary links. Its appeal lay not only in its elaborate design but also in that the experience was just as good on a desktop as it were on a tablet or a smartphone. It crossed devices effortlessly and readers were in awe.

Nachison says that although well-designed online stories are still a rarity, publishers are beginning to show more interest in experimenting with designs and story telling. The new adventures in new story-telling, which incorporate the ease of mobile format with stunning visuals and interactive media are bold moves, and are a good thing, Nachison believes:

“Experiments in the new story-telling styles and better ways to present distinctive, differentiated, long-form reporting are daring, icy shocks to the system.”

Data journalism isn’t only aesthetics and profits – it saves lives too (and it needn’t be expensive).

But interactive media can go further than just luring readers in with impressive graphics. By thinking outside the box, data and interactive journalism can be used as an information service for practical and humanitarian projects, and all on a relatively small budget.

Justin Arenstein, a Knight International Journalism Fellow, is working with the African Media Initiative (AMI) to establish interactive programs with the aim of improving – and in some cases, saving – lives.

In an interview with WAN-IFRA, Arenstein told Posetti that as Ghana profits its new oil resources, extraction companies are expected to pay 3 percent of their profits from the oil back to affected communities. He says the reality however, is that the money is being siphoned into an expense account instead.

His team created a program that “allowed people to send in the name of their village (via SMS). They could [then] find out how this impacts ‘me as an individual’.” The second installment of data tools allowed the audience to contact the relevant minister or authority for their region, effectively signing a petition against the action.

Arenstein says the company is also currently “using the cameras in phones to build microscopes that can magnify and then analyse the contaminates in water, specifically looking for things that cause cholera, E. Coli and various others.” They then send out an SMS to locals, letting them know when the water has become contaminated. If the water contamination is thought to be at dangerous levels, the SMS will contain alternative locations to collect clean water.

While these projects are able to make a huge impact, they can be financially friendly, too. The project, Arenstein says, will be done on a “small budget with devices that could be built by any country, by any newsroom, resulting in data that any newsroom would be able to analyse and turn into stories.”

It isn’t perfect, but it’s a start

Despite the flaws of mega-stories and criticisms that they are nothing more than publishers flexing their “webby” muscles, Nachison remains optimistic about the potential in mega-stories and what they mean for the future of journalism.

“These stories, imperfections and all, herald a potentially game-changing new direction for online news: thoughtful reading and viewing experiences baked into higher-value journalism, higher-value stories and higher-value productions in every encounter with every story and every page,” Nachison says, adding:

“Multimedia story-telling has undoubtedly arrived, only in a much simpler form: the web is filled, every day, every second, with text, photos, videos, maps, infographics and social media articfacts. Nearly two decades into web culture, online publishing remains dominated by old forms that have proven resilient and powerful. These are the elements of everyday stories, all easily produced and combined by anyone with a smartphone.

“The only thing that hasn’t flourished, yet, is putting them all together. That’s why the mega-stories matter.”

Note: You can read this article in full in the report Trends in Newsrooms 2014. The report, edited by Julie Posetti, is available here (free to WEF and WAN-IFRA members). In part 1 of this Trends in Newsrooms blog series, we provided an overview of the top 10 newsrooms trends of 2014, in part 2, we profiled trend 1: the urgent need to shield journalism in the Age of Surveillance. In part 3 we addressed trend 2: the rebooting of mobile strategy. The fourth installment of the blog series tackles trend 3: Back to basics with social media verification. The post on Trend 4: Analytics – when data drives the newsroom is here. Trend 5: Newspapers begin to challenge broadcasters in online video storytelling is available here. The post on Trend 6: The rise (and fall) of women editors here. The post on Trend 7: The growing importance of global collaborative investigative journalism is available here.