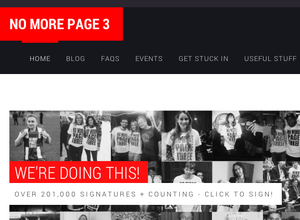 A petition collected by the No More Page Three campaign has received over 200,000 signatures, as well as pledges of support from many British politicians.

The Sun is the most widely circulated British newspaper in print, surpassing its closest competitor – the Daily Mail – by almost three million. The paper is the only major daily publication in Britain to retain the ‘Page Three girl’ feature. The Daily Mirror scrapped ‘Page Three girls’ decades ago, and more recently the News Corp-owned Irish Sun followed suit.

Lisa Clarke, a member of the team behind the No More Page Three campaign, told the World Editors Forum that a major problem with Page Three is the fact that it is juxtaposed against national and international news stories. “There’s plenty of research to show what it does, in terms of the negative effects, but yet we’re still putting it out there – not just in publications that people have to seek out but in news publications where it’s sitting among serious news stories,” she said.

“Today on Page Three we have the usual Page Three image, and on the next page there’s a serious story about what’s been discovered to have been going on in Rochdale about multiple rapes of young girls. Is that appropriate?”

The paper’s Editor-in-Chief, David Dinsmore, once said that he was “standing [his] ground” on the issue, but he has also said that “everything is always under review”. The paper’s former managing editor Richard Caseby also defended the feature, describing it in an open letter “as an innocuous British institution, regarded with affection and tolerance by millions. It is neither harmful nor offensive.” Caseby argued that the presence of a market for the images is enough to justify their existence: “Two thirds of Sun readers voted to keep the Page 3,” he wrote. “The Sun has more than seven million readers daily of which 45% are female and it remains the UK’s biggest selling newspaper which means its formula of news, sport, showbiz, and indeed Page 3, appears to be working for those who buy it.”

Clarke’s questions about Page Three’s relevance were first asked in 2012, when British writer and actor Lucy Ann Holmes launched the campaign after she became aware that the Page Three image was the largest photograph of a woman in the whole newspaper. Since then, the movement has gained traction, and its official Twitter account has over 30,000 followers. The campaign, born out of and sustained by the internet, structures many of its arguments around this question of Page Three’s relevance in the modern era.

“What it’s saying is in the context of a news publication, why are we portraying women as sex objects in 2014, when women are doing so much in the world, and are achieving so much? Why aren’t we showcasing our talents?” Clarke asks.

“Why is it that there are masses of objectifying, sexualised images of women in those newspapers next to multiple images of men, fully clothed in sportswear, achieving, doing stuff? The way we showcase women and the way we present women in the media is really important to the way women identify themselves…the way boys identify how to treat girls and women, and the way that men treat women. We know what this objectification does.”

Despite its strong position relative to other papers, The Sun‘s readership – like that of many other titles – has declined in recent years, and Clarke believes that this trend will eventually force News Corp to concede Page Three. “They’ve lost an awful lot of readers, much like the other newspapers [have], and they’re scared now about where things are going – although they won’t admit to it,” she said. “They know that they’re probably going to have to move with the times, but they’re scared that if they get rid of this now [they might] lose a lot of readership. I think that’s part of it. It likes to pretend, The Sun, to be a real working man’s paper, and to be quite anti-establishment, but really, you can’t get more Tory – more Establishment – than The Sun newspaper.”

The Sun is undeterred

However, The Sun shows no signs of backing down any time soon. In fact, the paper recently launched a competition in which a date with a ‘Page Three girl’ is the prize.

Contacted by the World Editors Forum for comment, a spokesperson for The Sun said: “Over 5 million people read The Sun every day and around half of those readers are women. The Sun is the UK’s biggest selling newspaper, which proves our formula – of brilliant journalism, entertainment, outstanding sports writing and Page 3 – still appeals to our readers. If The Sun’s readers didn’t want to see Page 3 they would tell us or, alternatively, they wouldn’t buy the paper.”

A challenge for Rupert Murdoch

Rupert Murdoch’s alleged predisposition towards not always respecting editorial independence leads Clarke to lay responsibility for Page Three’s future firmly in his hands. “None of us know what’s going on in the minds and hearts and discussion rooms of The Sun newspaper, or in Rupert Murdoch’s mind, because ultimately he’s the man who still has the power, and if he decides it’s going, it’s going,” she said.

“[The Sun] doesn’t push any boundaries at all, and what it does actually is portray a status quo that keeps the man who’s incredibly powerful and rich who owns it, exactly where he is by promoting sexism and those kind of things. That’s at the heart of it.”

But that’s certainly not the way The Sun sees it. “Since March, Page 3 has partnered with the brilliant CoppaFeel! charity to raise awareness of breast cancer. In the five months since The Sun started our regular ‘Check ’em Tuesday’ features – including a regular diary from CoppaFeel!’s founder and inspirational breast cancer survivor, Kris Hallenga – the charity has been inundated with positive messages and the number of calls to their helpline have rocketed,” The Sun spokesperson said.

“In addition, The Sun is very proud that, to date, we have heard from three women who have told us that, were it not for the Page 3/CoppaFeel! campaign, they would not have checked their own breasts and found they had early-stages of cancer.”

The No More Page Three campaign is staffed by a group of 22 volunteers, with around 10 active at any one time. Much of their work takes place in what Clarke calls a “virtual office”, which stands in stark contrast to the huge corporate structure of Murdoch’s company. But Clarke remains positive about the campaign’s potential. “They can’t carry this on forever because it’s just starting to look ridiculous,” she says. “It’s clear that the moral zeitgeist has moved. There’s been so many indicators lately: the Irish Sun dropped its Page Three, Stuff magazine has dropped its objectifying images on the front page and was making statements like ‘we’re in a post lads mags era’. A lot of the lads mags are losing readership, some are closing, and we are moving on.”

Issues with the way women are represented in the news media run much deeper than Page Three. Campaign group Reps, short for Representations of Women in the Media, has compiled findings of large-scale gender biases in the media, including evidence that under 10% of people presented in sports coverage are women. The Guardian‘s datablog, meanwhile, found in 2011 that in a given three-week period only 22.66% of reporters on seven British national dailies – and Radio 4’s Today programme – were female. This is a pattern repeated globally. “Women are constantly portrayed in the media on the basis of their relationships with men, or with children, so they’re all immediately presented as mother, grandmother, wife, girlfriend, or somebody no matter what their own achievements might be,” says Clarke.