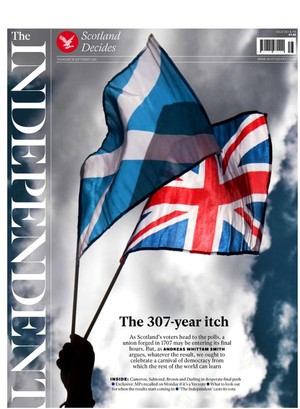 Several editors felt brave enough to publish triumphant front pages before any confirmations, while others were more reserved. Ultimately, though, Britain’s nationals covered the fall-out from the referendum in much the same manner. Friday’s newspapers reiterated just how monumental this referendum was. The eyes of the world were on Scotland, and this vote, with its historically high turnout, was a “carnival” of democracy to be celebrated.

Yet if this was a vote which brought out a joyous, community spirit in certain towns and which, for many, reignited an interest in politics, the papers agreed that it also caused great divisions in Scotland, even among friends and family. All of the major broadsheets covered the arrests following intimidation and aggression from supporters of both sides.

Numerous column inches were dedicated to reviews of the main political players in the referendum, with most in agreement that Salmond was sublime (though he has since resigned), Cameron complacent, and Darling a much-needed stabilising presence for the Better Together campaign.

The anger of several English MPs at the imminent devolution of further powers to Holyrood was widely-covered, and the Sun, in one of very few editorials to discuss the referendum (most left it to their comment writers), demanded that Cameron “offer us (England) a better deal too.”

Above all, however, the unanimous stance of the papers was a turn to the future, and a recognition that, regardless of the result, change was coming to Scotland.

Following an initially cautious early front-page displaying a bagpipe-player with flames emanating from his instrument, and no real leading headline, the Telegraph’s later edition announced, “The United Kingdom is safe”.

Safe it may be, but, like all the nationals, the Telegraph seems sure that power will be taken from Westminster and handed to Holyrood in the coming months.

“This latest referendum may be over, but nationalism is far from done with ,“ writes Tom Rowley, in a view echoed by his colleague, Judith Woods; “Whatever the result, today’s Scotland will not be the same as yesterday’s.”

Allan Massie claims the vote has caused deep divisions in Scotland, “Either they will be living in an independent state which they didn’t vote for, or in a Union they have repudiated”.

Michael Deacon’s sketch perfectly describes the tension between those who feel the referendum brought them together, and those who feel it pulled them apart. Having followed a march, he writes, “It didn’t feel threatening or aggressive. In a way, it didn’t even feel political: it felt more like a parade, a community day out, in which neighbours who might never have previously spoken joined together, young and old, and marched not merely for an ideological goal, but for the excitement, the noise, and the shared spirit. They were enjoying themselves.” He later admits, however, “It wasn’t like this everywhere,” before discussing the intimidation and violence which tarnished both campaigns as they ended.

The Times was a little bolder in its early edition – if only slightly so – and led with “’No’ camp predicts victory”. It later opted for a picture of triumphant unionists with the headline “We stay together.”

In line with the other nationals, it focuses on the joyous climate of the vote, “marred by only a small number of violent outbreaks”, and the anger of English MPs at the handing out of “party bags” to Scotland.

If The Times differs from other nationals, it is in its nod to the recent discernibility and boldness of No campaign voters. The silent majority, as Darling so frequently put it, found their voice in the final days before the election. “A people’s army of ‘No’ supporters broke cover yesterday and took to the streets,” it writes. “Suddenly, ‘No’ voters aren’t invisible”.

The main opinion piece on the referendum in The Times was by Phillip Collins, who commends Salmond for having gained almost exactly what he set out for; “The upshot is that, win or lose, Mr Salmond has still achieved an easy victory.” Collins optimistically concludes that “The referendum shows the death of political activity has been prematurely declared.”

Elsewhere, The Times links these two elements –  the shrewdness of Salmond and the upturn in voter turnout – by suggesting that it was the tactics of the Yes campaign which made the nation more politically active. Long-term planning, a proficiency with social media, and even, as one resident suggested, the targeting of pie shops – “as anywhere that sells pastry in Scotland will usually have a crowd” – were behind the relative success of the Yes campaign, it claims.

“Scotland’s history makers” read the front page of The Guardian on Friday morning. Broaching the same issues of high voter turnout, voter intimidation and the anger of English MPs, The Guardian largely followed suit with its fellow broadsheets.

Gaby Hinsliff, in a comment piece titled “Why David Cameron should fear for his future”, writes scathingly of the Prime Minister, suggesting, “He has now flown so often by the seat of his pants that they’re getting worryingly threadbare.”

Its leader also notes that an independence party took place at a Scottish bar last night, with “All English welcome (except Cameron)”, and beer priced at £2 for Yes voters, and £20 for Unionists.

As early as 3am Friday, The Sun had published a front page declaring, “Union Back”. Habitual readers turning to page three for their daily dose of scantily clad women will have been disappointed, however, as adorning the right-hand side of a double page spread was Alex, 59, a First Minister from Linlithgow, asleep in his car.

It suggested that with Salmond refusing to stay up for the vote count, he was resigned to having lost the referendum. This was followed by a full page on Britain’s “Devolution Revolution”, warning of the dangers of handing further powers to Holyrood . In a column, Frank Field, a Labour MP, writes that “voters will kick out MPs who toe the party line on backing the £1500 dowry” – a reference to the £1,500 extra spent on Scottish citizens compared with their English counterparts by Westminster each year.

It also offers marks out of ten for the referendum’s foremost politicians: Salmond is awarded an 8/10 for a “brilliant campaign”, while Ed Miliband, rated 1/10, was “an unmitigated disaster”.

Its sister paper, The Scottish Sun, offered readers a “historic referendum special”, with “Reunited Kingdom” splashed across a blended image of the Union flag and the Saltire.

Following their superb front page on Thursday, the Independent again chose to focus on the importance of the vote. It celebrated “an unprecedented display of democracy and patriotism”, and in a tone fitting for the occasion, wrote, “The 307 years since the last Acts of Union – and the last 30 months of exhaustive, exhausting debate over their current worth – had come to this”.  Its late edition declared, “The reunited kingdom”.

Seeking to contextualise the extent of the upturn in voter turnout, it noted, “In Kinghorn, Fife, more voters passed through one of its polling stations in the first 30 minutes that for the entirety of May’s European elections”.

Regional newspapers in the north of England joined forces on Friday to demand fair treatment from Westminster in the wake of the referendum result.

Six titles, from three different publishers, jointly demanded devolved regional powers for the north of England, in a bid to ensure Westminster does not leave it behind.

“The unprecedented coming together of the great northern newspaper brands should send a clear message to our politicians that it is vital they make sure the north does not suffer from having an economic powerhouse to the south and a far more competitive Scotland to the north,” said Brian Aitken, editor of The Journal in Newcastle.

The leaders of the three main parties have since come out in support of the newspapers’ campaign.