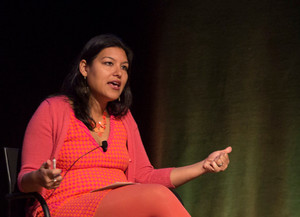 POSETTI: How do you try to transform the traditional relationship between audiences and journalists, which has seen significant barriers, particularly in a legacy media/print media context?

Kalita: One of the main ways to change that relationship is actually to acknowledge the wisdom of our audiences. It sounds so simple but for a long time journalists have somehow presented themselves behind the information. I’m trying to remove as many layers as possible. For example, if I see an interesting tweet from somebody I’ll reach out and say, “hey, that’s a great thought. Do you want to say more than 140 characters on it?” and bring them into our site. Other ways are to think of the issues of the moment and what are the intriguing lenses on it? During the World Cup I had a 9-year-old write for us about where he buys his stickers and how he’s learned about maths and the world through the World Cup. It was a really smart piece because this 9-year-old was actually incredibly smart. But it was also a universal piece, because who doesn’t remember playing soccer and being so enthralled with the game of the moment? So there’s both a uniqueness as well as a universality to it. I want those voices on the pages of Quartz, not just as the sound bite or quote, I want to go much deeper and actually give them their turn.

So, if I can paraphrase, you’re aiming for a more conversational tone to the writing that you do, particularly with regard to headlines. You’ve said a lot of effort is put into the initial framing of the story through the headline. Can you please tell me a bit about what you think makes a good headline and why?

Kalita: I grapple with what makes a good headlines several times a day. It’s something that we all – on staff – take very seriously and very personally. We think about sharability with the headlines. We think about who’s the audience we’re trying to reach, how, and why? I look for ways to make those headlines more accessible. Maybe it means knocking out use of terms like ‘government’, ‘official’, or ‘according to’, things that feel distant as opposed to authentic. It’s just stripping it down to ‘what are we really trying to say?’

There’s also the curiosity gap. How do we get people to want to read this story [without using] “what happens next will shock you”, but [communicating] that we actually have really interesting layers to this story.  I like to say that this is the generation where ‘it’s complicated’ is okay. If it wasn’t complicated we wouldn’t be writing about it. Again, nod to the wisdom of your reader but in the headline nod to the layers of your story and be honest about that.

I also try to use numbers. For example, for one piece we wrote about medical school debt the headlines was “I went $230, 000 into debt to become a doctor in America”. It’s a bit of a mouthful, would it have fitted on page three on a 700-word white space type of story? Probably not. But does $230 000 instantly form a connection to the reader? ‘I can’t afford that’, ‘I can afford that’, ‘I sympathise with you’… It elicits a reaction from the number alone. If you see headlines [being] about connecting with your audience, it puts you in a much better place to get that story shared.

Journalists are often taught either by their editors or in journalism school ‘never write a headline or start a story with a number because it will alienate an audience’. But what you’re finding is if the number resonates, this is a good way to connect?

Kalita: I think it is and it’s also concrete. I’m trying to have journalism actually feel real, tangible, authentic, and numbers are actually a great way to do that. They also provide context. If something is one and a half times the size of, say, a football field, that’s been an old journalism adage forever. I think a lot of these lessons that we apply now to headlines and sharing completely come out of legacy journalism.

If we can move now to the very idea behind Quartz. From your point of view what’s good about it? Why does it work? What’s the core mission?

Kalita: The core mission is rooted in a reader; somebody who cares so much about the global economy, feels a member of that economy and yet is overwhelmed [with content]. So we run everything from stories about CEOs exiting to when you should never have your cell phone out in front of your child, because our reader cares about both of those issues. I don’t think that we treated it as an either/or proposition. I think we really do nod to smartness of our readers and this desire to serve them with content that’s both important but also interesting. I look for an emotional connection with readers but I also look for a bit of an instructional component.

I feel like what Quartz has going for it is that we are honest. I often tell reporters to eliminate the BS as far as “on one hand and on the other hand”, there might be many hands of a story and that’s OK. Your readers, I think, respect you more if you nod to the complexities of that, but again in a very accessible way. I feel like a lot of our readers, at least the ones that I interact with, feel like we are one of them in our interactions.

Are there any expansion plans? Is Quartz going global?

Kalita: We just launched Quartz India in June, which has been a tremendous success. We are looking at other markets and other niches but a part of our ethos is driven by this idea that you and I have a lot in common, and might be harried by some of the same factors of life and work. Does that story need to come from a place of geography? Probably not. In some cases geography will be where we expand but in others it’s going to be by obsession or theme areas.