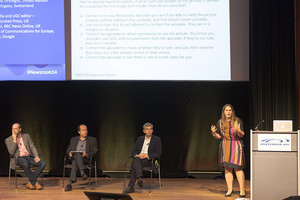 That is one of the User Generated Content (UGC) related ethical conundrums posed by a panel of experts at the International Newsroom Summit in Amsterdam last week. The panel, featuring the BBC’s Steve Herrmann, AP’s Fergus Bell and Google’s Director of Communications for Europe, the Middle East and Africa Peter Barron, was moderated by UNHCR social media strategist Claire Wardle. Jessica Sparks and Alice Matthews explore the UGC issues that should have newsrooms ethically engaged.

“People feel empowered to tell stories. They want to show that they were there, they want to be a part of news and part of telling that story [and] the more UGC that they see, the more that they feel they want to contribute,” Fergus Bell, AP’s International Social Media and UGC editor, told the World Editors Forum

He says as audiences recognise they can be involved in the news process, newsrooms will be presented with a plethora of rich content.

“We don’t know what that content’s going to look like yet and that’s exciting and an opportunity.”

Claire Wardle says UGC is still a growing area, but has great promise in offering content gathered and produced amidst the action, where it wouldn’t have otherwise been.

“Increasingly the best pictures are the ones captured by eyewitnesses at the scene with a camera-enabled phone. By the time a professional crew arrives, the ‘action’ is often over,” she told the World Editors Forum.

“Newsrooms should be harnessing those pictures, and then providing the context to the pictures and the story.”

Providing the context of UGC is proving is a major challenge facing the fast-paced, digital-first newsroom. As UGC is still a new area, best practice is still developing.

“Is it ever right to ask [users] to go and film something? If they get injured or something happens to them, what is our duty of care to them? Are we responsible for them?” Fergus Bell asks.

He says managing UGC comes down to “working out your standards before you have to deal with it”. These standards need to address issues such as crediting and informed consent.

Bell says users are becoming more aware of their rights.

“They understand that they own that content, so I think that’s something that we need to address as an industry really quickly – how we deal with permissions and is it ever ok to run something without permission?”

A TOW Centre Global Study of UGC in TV and online by Claire Wardle, revealed that UGC producers were scarcely credited.

“Only 16% of eyewitness media was credited and [there were low levels of labelling] i.e. explaining that the pictures were captured by someone unrelated to the newsroom.”

Content can appear across a range of platforms including social media, mobile apps of websites. Steve Herrmann, Editor of BBC News Online says when publishing digitally, content can take on a life of its own and appear in many different contexts.

“It’s no longer as simple as knowing that it’s going to go in a newspaper in a particular place or a particular part of a TV broadcast.”

He says it’s important for both journalists and content creators to understand the parameters.

RESPONSIBILITY TOWARDS THE AUDIENCE

Steve Herrmann says verification is the main challenge when dealing with user-generated content.

“The biggest challenge of all is establishing something is true and retaining peoples’ trust at a time when information is moving so fast it can be very, very hard to check.”

He says that although the speed of the news cycle makes verification difficult, newsrooms need to make sure it’s correct before publishing or broadcasting.

“Or at least if you’re not quite sure, you need to be very clear [about that]”

However, Claire Wardle says the phrase ‘we cannot independently verify this’ is doing a disservice to the audience.

“Until we sort that out, we’ll have content being run too quickly with these caveats, and this isn’t transparent,” she says, indicating that there needs to be more transparency when dealing with UGC. Wardle says newsrooms have had to race to catch up with the flood of eyewitness content and aren’t sure whether they are managing it correctly.

Fergus Bell argues that accuracy should still take priority over speed: “(Newsrooms) will be forgiven if [they] are right and a little slower, rather than wrong and quick.”

“Given the state of the news media industry, we don’t need to give any audience an excuse to leave us or to turn off or to not trust us. Therefore, any mistakes are so dangerous because you can lose that trust that you have between yourself and the audience in a heartbeat.”

With these concerns in mind, the ethical conundrums presented by Wardle to the International Newsroom Summit last week are worth deeper consideration by journalsits and editors. See her Slideshare presentation below for digital ethical hypotheticals to test your newsroom on.

Indian Printers Summit: ‘Print is not reviving; it has already revived’

How The Sunday Times is winning new audiences