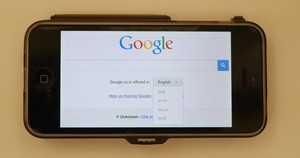 Google announced the creation of the Indian Language Internet Alliance earlier this week, partnering with media companies in the country to attract Hindi-speaking users to the web.

Partnering with Indian publications like ABP News and Amar Ujala, the ILIA hopes to engage 500 million Indian-language speakers with the internet by 2017.

Currently there are over 200 million internet users in India, approximately 16% of the 1.2 Billion population. Of the current internet users, 198 million are English-speaking.

“It is ironic that with more than a 200 million Hindi reading population, Hindi is still not among the top 10 Internet languages in the world,” The Hindu’s Publisher’s office said in response to questions from the World Editor’s Forum. “It took India 10 years to reach from 10 million to 100 million internet users. In last 3 years it has almost doubled that to 200 million users. The next wave of the growth is expected from the language Internet usage.”

The development, The Hindu said, has the potential to increase consumption of Hindi news.

Smart Phones, Google and the News

Five million people access the internet for the first time each month in India, most of them through mobile devices. Coupled with strong sales of cheap smart phones in India, this changes the way Hindi-speakers consume the news, according to The Hindu. “With more and more low cost smart phones, access to this content has become and will continue to become easier,” one said. “The key will be the quality and usability of the content and also the need for better internet infrastructure. Mobile will also bring the younger generation into the news consumption and sharing cycle.”

“With launch of Android One which will bring more web accessibility to the targeted group for Indian language content, this is a holistic plan to bring their services to more Indians which cannot be possible without doing it in Indian languages.”

However, there is some controversy evident in Indian media coverage about Google’s announcement. Much of the debate centres on whether Google’s advertising model will have a negative impact on Hindi publications’ traditional business models.

K Yatish Rajawat, editor of FirstBiz, wrote that the move could ‘destroy local language newspapers.’  “This might look attractive in the short run as Google promises the world, more visitors, and more advertising money,” Rajawat wrote. “But in the long run it makes a commodity of these sites, as they become feeders for the global search engine, they lose their captive power, their readers slowly move away. The Indian language Internet Alliance is a way for Google to get into Indian language sites and wean away their customers.”

Rajawat warned that media partnerships with Google will affect revenues and the traditional business model of Hindi-language publications. “Once Google has access to their content and their websites, it may even promise placing advertising on these sites,” Rajawat wrote. “This is an attractive proposition but these companies will then reduce their sales staff on the digital side, as Google promises to sell their inventory. Their customers  like an education institution in Kanpur, a jeweller in Madurai, a builder in Ujjain, a sweets shop in Chennai would have earlier gone directly to these sites but now they will go to Google as it would  give them a much better proposition.”

However, according to The Hindu, the risk of losing advertising revenue to Google is overplayed. “Yes, there is that danger, but newspapers could use print plus digital, broadening the spectrum of possibilities for the local advertisers through cross platform integration.”

Rajawat objected to the model employed by Google, where the search engine posts snippets of headlines from publications without paying the content creators royalties.  Drawing on examples from Germany and other countries in the EU – where news publishers are embroiled in legal proceedings against the search engine –  Rajawat warns of similar circumstances in the future with Hindi publications.

While some English publications have developed paywalls to compete with Google in the past, The Hindu is unsure whether Hindi publications will follow that model. “Currently, no site is behind any kind of paywall,” The Hindu said.

“In print and digital English language newspapers have been able to charge higher ad rates than their Hindi (and other Indian language) counterparts. Whether English or Hindi, and with or without the presence of Google, the quality and uniqueness of the content alone will determine if a paywall is possible or not.”

Ultimately, for The Hindu, it is too soon to tell what impact Google will have on Hindi publications. “With Google having the lion’s share in Search and now enabling Hindi content, most Hindi publications will expect more users through this alliance. Who will benefit more in the long run – Google or the publications – is not an easy guess.”

Local language issues will be on the agenda at Digital Media India taking place in New Delhi 10-11 February 2015.