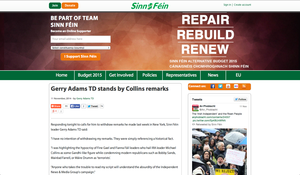 He made the comments at the Friends of Sinn Féin fundraising dinner in New York, after which his edited speech was posted on the official Sinn Féin website. Adams wrote, “Mick Collins’ response to The Independent’s criticism of the fight for freedom was to dispatch volunteers to The Independent’s offices. They held the editor at gun point and then dismantled and destroyed the entire printing machinery! Now I’m obviously not advocating that. Just pointing up the hypocrisy of the Taoiseach, the Tanaiste, and the Fianna Fáil leader.”

Adams’ statements were viewed as a veiled threat against journalists and at the very least insensitive to Independent Newspapers (Ireland) Limited (INM), which has seen two of its journalists murdered.

In 1996, INM journalist Veronica Guerin was shot dead as she investigated the activities of criminal gangs in Dublin. In 2001, INM journalist Martin O’Hagan was murdered as he investigated the activities of terror gangs in Northern Ireland. The Group Editor-in-Chief of Independent News and Media, Stephen Rae said, “As a group we have lost two courageous and campaigning reporters to violence in the past. In that light, the Adams remarks are astonishing.”

WAN-IFRA wrote a letter to Adams, respectfully calling him “to retract these comments and to publicly affirm your abhorrence of all forms of violence against journalists” and to remind him “that even a facetious reference to attacking journalists is entirely inappropriate.”

In response to the international condemnation, Adams issued a statement on the Sinn Féin website saying, “I have no intention of withdrawing my remarks. They were simply referencing a historical fact. I was highlighting the hypocrisy of Fine Gael and Fianna Fáil leaders who hail IRA leader Michael Collins as some Gandhi-like figure while condemning modern republicans such as Bobby Sands, Mairéad Farrell, or Máire Drumm as ‘terrorists’.”

55 people are talking about this

See The Irish Times’s other Tweets

She is quoted in The Irish Times report as saying, “He was referencing a turn of events many, many moons ago that Michael Collins, an Irish patriot took that particular action. It was a comment as simple as that, it certainly does not constitute a threat in any shape or form.”

The comments came just days after the first UN-designated International Day to End Impunity for Crimes against Journalists on November 2nd. #EndImpunity is a global campaign designed to bring to justice those who get away with murdering journalists. So far this year, 42 journalists have been killed in the course of their work.