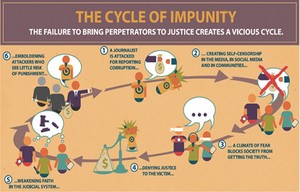 “Journalists are increasingly being targetted and killed with impunity worldwide”, UNESCO’s Director of Freedom of Expression and Media Development Guy Berger told the World Editors Forum.

Between 2007-2012, UNESCO’s Director-General condemned the killings of 430 journalists and asked UNESCO Member States to investigate the cases and produce a report. Only 42% responded to this request and there were convictions in just seven out of 430 cases.

“Local journalists who do local stories are the biggest victims of killings,” Berger noted, adding that newspaper journalists represent 40% of murdered journalists – the largest of any media sector.

Why should journalists report on impunity cases?

The importance of reporting such cases was underlined last week by a new Committee To Protect Journalists report, The Road to Justice. “I found both in looking at cases that have seen convictions, and from the journalists and press freedom activists I spoke to…that sustained media coverage of a case can really make or break its chances of gaining justice,” report author Elisabeth Witchel told the World Editors Forum.

But there is a difference between effective, sustained coverage of impunity cases and making cursory reference to journalists’ deaths.

“I have yet to come across a media outlet or group, domestic or international, that has a…consistent approach to monitoring and reporting on cases of journalists murdered for their work,” Witchel observed.

And, as Berger notes, it’s not only the murders that need to be reported.

“The real story is this impunity question, the killers getting away scot free. That requires more reporting and investigation – or at least nominating a reporter in the newsroom to monitor the issue,” he said.

What does good coverage of impunity cases look like? Seven case studies

Witchel cites several examples of media outlets that kept a strong spotlight on the case when one of their own were killed. “Many journalists in Pakistan – rival and friend alike – told us that Geo Television threw its full weight behind the murder of Wali Khan Babar in Pakistan and kept constant coverage of the case on air,” she said.

“In Pakistan it was repeatedly a subject of dicussion among the people we met with – that there should be more reporting and monitoring of these cases by media outlets and more information sharing by different media houses when journalists are attacked.”

Witchel also highlighted Brazil’s Globo TV coverage of the Tim Lopes case which reperesents an example of an outlet pushing for justice by “keeping up enormous pressure for one of its killed journalists.”

Berger cited sustained coverage of journalist jailings and killings by Italy’s La Stampa and Finland’s Ilta Sanomat, which produced favourable reader responses, as examples for others to follow. The Independent’s (UK) series ‘Voices in Danger’ is another an example of effective coverage.

And Witchel points to the Chauncey Bailey Project and the Rodrigo Neto Committee which model collegial solidarity and a collaborative investigative approach. “This is a model in which colleagues get together following the murder of journalist and attempt to complete the investigation he or she was working on at the time of the killing, or conduct their own investigation into the killing,” Witchel said. “The Chauncey Bailey Project was very successful and their work led to the a full prosecution of the killers.”

So how could news media strengthen coverage of crimes committed against journalists with impunity? Five tips

Guy Berger, who was a journalist, editor and journalism professor in South Africa before moving to UNESCO, offered these suggestions to the World Editors Forum:

And Berger argues that spending is not required to increase coverage in this way. “On the other hand, if there is no coverage, the human cost is going to increase because every time a reporter or a blogger is killed and nothing happens, the risk to all journalists increases,” he said.

In an earlier interview, Berger outlined the arguments he hears from editors who resist covering such stories and offered counter-arguments to their objections.

Note: The World Editors Forum is offering a range of content free for publication, including this article, to mark the first UN Day to End Impunity for Crimes Committed Against Journalists.