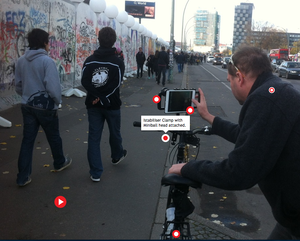 “Yesterday and the day before, I was filming along the Berlin wall – a powerful story – and I was using my bicycle as a dolly and I had my ipad mounted to my bike and I was getting great quality,” Montgomery said. “People don’t expect it.”

Montgomery has developed an online film school aimed at teaching journalists how to film and edit videos on their smart phones. “I had been training in smart phone and video journalism around the world for the last seven years, and had this idea to find ways to make it easier for people, who don’t have a lot of money, to learn.”

“I’ve been working on that the last couple of months to make it possible.”

The advantages of learning to film stories on mobile devices, Montgomery states, is its size. “I think especially in difficult situations or when you need to be more covert, the smaller the device the better,” he said. “The authorities, or official people often don’t think that you can do professional work with an iphone.”

What about the rapid development of smart phones? The release of a new smart phone like the iPhone 6 or new android devices? According to Montgomery, a solid foundation in video making is essential to overcome these issues.

“That is one of the problems with video,” he said. “I try and find evergreen and universal solutions because technology aside, what most journalists or most people who have a short story tell to tell, don’t know, are the secrets of film making.”

“I try as much as possible to keep technology relevant and that is one of the beauties of doing video lessons, so that I can go back into a lesson and I can update it. Or I can add a new lesson to the course. Once you know that, it doesn’t matter what phone you have, you’re not going to waste time doing things you shouldn’t, you’re going to be focused on doing things you should.”

Free course offer: Montgomery is inviting readers of the EditorsWeblog the opportunity to take the first course in “Make Smartphone Video Like a Pro” for free (valued at US $100). The coupon expires November 14 and can only be redeemed by following this link.