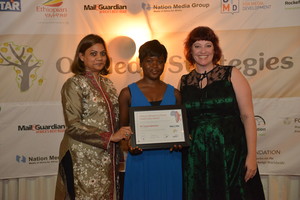 Ogunseye has won the inaugural award presented by WAN-IFRA, the World Editors Forum and the African Media Initiative. Ogunseye has been recognised for her journalistic excellence and leadership among women in African newsrooms. The judges praised her commitment to high quality ethical journalism, particularly her focus on the environment, justice and good governance.

She says winning the award has helped her “to remain true to the ideals I’ve always believed in, which is ethical, balanced investigative reporting.”

As the first female editor of Nigeria’s largest newspaper in its forty year history, Ogunseye has helped increase its circulation since 2013.

Making the Sunday Punch the best paper in Nigeria with the help of her team has been a career highlight for Ogunseye. And she says she wants to “help more women [move] up the ladder.” The World Editors Forum asked her to rate her top ten tips for success as a young woman journalist with editorial leadership ambitions.

1. Do not let your gender restrict you from doing all you want to do

2. Do not allow anyone to tell you that gender is a barrier to success

3. Be outstanding: do better than everyone

6. Re-invent yourself: go for regular training both locally and internationally. Most (training) is free for journalists

7. Surround yourself with mentors both in the industry and your organisation

8. Don’t be afraid to ask for help

10. Live: strive to be healthy within and without

She attributes her successful career path to “God’s grace. Also through hard work, dedication, doing impactful journalism, having great mentors and working for a newspaper that believes gender is not an impediment to journalistic growth.”

Ogunseye started her journalism career in 2004 at The Sun newspaper and moved to News Star newspaper in 2007 as a senior correspondent. She joined Punch newspaper in 2009 and was the sub-assistant editor for news and politics till 2012.

She will be honoured in Narobi during a gala dinner tonight.