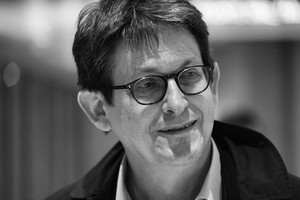 In 2016 Rusbridger will suceed Dame Liz Forgan as chair of the Scott Trust, the British company in charge of the Guardian‘s financial backing and editorial independence.

In an email to Guardian staff, Rusbridger wrote, “In February I’ll have been editor for 20 years. It’s been quite an extraordinary period in the life of the Guardian.”

“The past two decades have been marked out by wonderful Guardian writing, photography, innovation and editing,” he added.

Rusbridger is best known for overseeing the publication’s transition from print to digital media. He played an integral role in covering the the News of the World scandals, Wikileaks, the Edward Snowden revelations, faced a number of high profile defamation suits, and is considered a leader in “open journalism.”

“There have been gruelling court battles, dogged campaigns and tough investigations,” he wrote. “The Guardian – always the outsider – has won a global reputation for its willingness to fight for the right causes. We have strong future leaders in place with unparalleled news and digital experience. We have built up – and banked – a considerable financial endowment to secure future innovation and build on our quality journalism.”

Alan Rusbridger graduated from Cambridge University with a degree in English in 1976. His career began as an intern at Cambridge Evening News, where he was offered his first position as a journalist.

Rusbridger first joined the Guardian in 1979 where he worked as a general reporter. He then left in 1986 to briefly join the Sunday Observer as a TV critic. In 1987 Rusbridger worked as a Washington correspondent for London Daily News.

Rusbridger returned to the Guardian as a feature writer in 1988. It was during this time that he launched the Guardian Weekend magazine in 1992 as well as the paper’s G2 section.

He was appointed deputy Editor-in-Chief in 1994. In this role, Rusbridger oversaw the Guardian’s transition to the digital sphere. He oversaw the newspaper’s redesign to a European Berliner format, considered by some to be a costly gamble. Rusbridger is largely credited for the Guardian’s online success, where in 2014 it was the second-most-popular English news site, behind the Daily Mail and overtaking the New York Times.

High profile stories overseen by Rusbridger involved libel and press freedom, including cases involving Neil Hamilton, Jonathan Aitken, the Police Federation, Trafigura, freedom of information and Wikileaks, stories which were not without their detractors.

News of the World

In 2009 Rusbridger oversaw coverage of the News of the World’s criminal activities which included, among other things, phone hacking and police bribery. The Guardian’s coverage of the scandal was instrumental in changing the media landscape in the UK, leading to the Leveson enquiry. Rusbridger appeared before the enquiry, before the recommendations were handed down in November 2012.

In 2010 Rusbridger and the Guardian collaborated with the New York Times and German publication Der Spiegel to published redacted leaked documents provided by Julian Assange through Wikileaks.

On June 5 2013, the Guardian published the first leaks of classified National Security Agency (NSA) documents. The first article published revealed an order by the Foreign Intelligence Surveillance Court (FISC) requiring a phone company to hand over the metadata of American phone calls to the FBI. The Guardian, under Rusbriger’s direction, published a series of confidential documents about the widespread surveillance of private individuals by the US and UK governments.

Rusbridger faced heavy criticisms from members of Government and sectors of the public. Under increasing pressure from government agencies in August 2013, Rusbridger made the decision to destroy hard drives containing information leaked to the Guardian by Edward Snowden, rather than comply with Government demands to hand the documents over.

In December 2013, Rusbringer gave evidence before a Home Affairs Select Committee hearing on counter terrorism at UK Parliament with regard to the publication of information leaked by Snowden.

Liz Forgan, the current chair of the Scott Trust wrote:

“Alan has been the outstanding editor of his generation. Fully embracing the opportunities of the digital age, he has built on the best traditions of his distinguished predecessors, transforming the Guardian from a print-only national newspaper into the world’s leading quality newspaper website.

“We are delighted that The Scott Trust and the wider Group will continue to benefit from his experience, overseeing the independent body that guarantees the editorial integrity and commercial future of the Guardian.”

The story I never wanted to write. @arusbridger has been supportive as well as brilliant editor of the Guardian http://gu.com/p/4446y/stw

Alan Rusbridger to stand down as Guardian editor-in-chief

Charlie Beckett wrote for the London School of Economics:

“But first we should acknowledge the bravery of a man who published not just the WikiLeaks revelations, but also the Snowden data bomb in the teeth of physical, political and personal intimidation from the highest authorities and despite the risks of working with such unusual characters as Julian Assange on such sensitive, complex and important topics.”

Congrats to @arusbridger on stepping down after 20 years as editor of The Guardian. Brilliant leadership & digital transition.

.@arusbridger is the world’s best newspaper editor in any language I can read. Our craft still needs his vision, leadership, courage.

15 people are talking about this