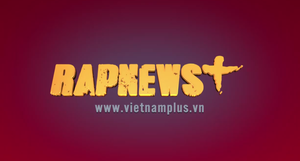 Le Quoc Minh, Editor-in-Chief of Vietnam Plus, part of the official Vietnam News Agency, came across the idea of rapping the news after a trip to France. Seeing a group of Senegalise people rapping at a protest, Le thought it would be a good medium for news.

“I thought I could borrow this idea and see if it would work in Vietnam or not,” Le said. “After I went back to Vietnam I saw the way television news worked. It was difficult to attract young people because it was really long, about 15 minutes, and they were talking about serious issues.”

“I thought that we would have to make it shorter, at least four minutes,” he explained. “But it had to have entertainment value with a little bit of fun and I changed the concept … so the topic is very serious but with catchy phrases so it’s easy to remember.”

Each video has over 100 000 hits on Youtube, with the Rap News Plus channel attracting over 29 000 subscribers. Each video rap bulletin takes two weeks to produce. Members of Vietnam Plus’ editorial team assist the Hanoi-based rap group Da Lab to produce each piece. “I have two editors collecting and writing news for the team,” Le said. “After that Da Lab re-writes it suit their flow, their singing style.”

How did Le come across Da Lab?

“I knew some people in the music community and I wanted someone to introduce me to a group of musicians on the condition that they sing well but they couldn’t be famous,” Le said. “I was introduced to three groups and I chose ‘Da Lab.’”

“Before they had met me Da Lab were making music for about six years but they weren’t famous yet. I pitched my idea to them and asked if they were interested. They saw merit in the idea. If you’re interested we’ll give you news pieces and you can be famous. It’s really unique, which is why it’s so successful. Now they’re really famous.”