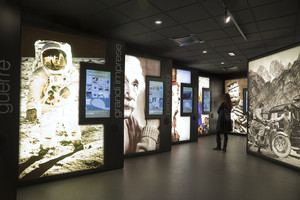 On the ground floor of La Stampa’s Turin headquarters is the La Stampa Museum, an interactive space dedicated to the history of the newspaper. The musem uses La Stampa’s coverage of big stories over the decades as a vehicle to showcase technological innovation.

Since opening in October 2012, the museum has facilitated direct community engagement with local readers and visitors, while building a new source of revenue.

Between memory and future

More than 33 thousand people have visited the museum to date. When they embark on a tour of this impressive space, they are taken on a walk through time, experiencing artifacts like printing equipment and telegrams from foreign correspondents.

In a journey from La Stampa’s 1867 beginnings to the current multiplatform structure, the museum shows the evolution of the newspaper from early rotary printing presses to today’s digitally integrated newsroom. The one constant throughout has been quality journalism.

Some parts of the museum have an educational focus, teaching visitors the industry’s terminology or allowing them to play Editor-in-Chief in an interactive game which allows them to design a front-page.

Federico Bollarino, is La Stampa’s architect and curator of exhibitions and oversaw the establishment of the museum. “La Stampa made a futuristic choice in the way they addressed the museum. The main goal was – instead of telling a nostalgic story of a past that has gone – to transmit the emotion of how the newspaper evolved through the print-digital changes, lining up the history from its roots to the multiplatform current reality. The visitor is captivated into an emotional experience through interactive supports.”

The visit is both an historical journey and one through the production chain of the paper. And, like the news business, the museum is constantly evolving. “We’re experimenting with a new type of visit: while the visitors are taking the guided tour, actors will “interfere” with the visit, staging the type of events that could happen in a newsroom,” Bollarino explains. “For example they will stage the day of 20 July 1969 when the world was waiting for news of the moon landing. The actors will try to transmit the tension of that day in the newsroom.”

“One of the most emotional visits is the midnight tour which ends with the visit of the printing plant where visitors assist at the warming up of the printing press and experience the start of printing before leaving with the first copies hot off the press.”

As Bollarino puts it, “La Stampa had the foresight to make the experience of the paper the point of contact between the news organization and its readers”.

An emotional tool and an alternative revenue stream

The Museum also provides an alternative revenue source beyond the business of visits, and so it does La Stampa’s digitalised content archive. “Again La Stampa had the foresight of digitalizing its entire archive – a choice undertaken by a limited a number of papers so far, [including] Le Monde and the New York Times – which represents another potential gold mine,’’ Bollarino says.

“The story the Museum tells doesn’t end with the physical space of the museum,” he adds. “The newspaper has the peculiarity of telling the story of a territory, a community, an economy. This is particularly true for La Stampa which is so deeply-rooted in the region. One of the interesting projects we launched is a partnership with a local company to create an exhibition to celebrate 20 years of their activity. Twenty years of advertising tell the story of the firm from its perspective but the newspaper has the power to tell the story from the perspective of the city and its inhabitants, taking into account how they have lived it.”

La Stampa’s projects have opened the way for international collaboration. La Stampa and the Japanese Yomiuri Shimbun recently joined forces for an exhibition at Yokohama which shows pages of the two papers from the First World War.

The digital archive is accessible for free, with stories from the 1897 to today.